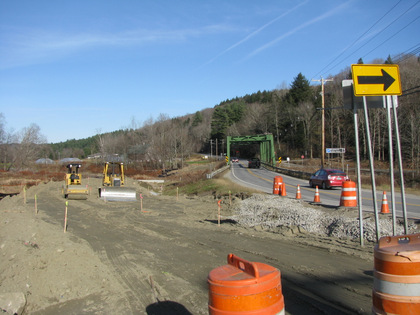 Currently, the construction crew is preparing the site to install a temporary (or “Mabey”) bridge just downstream of the existing structure through which traffic will be rerouted while the crew works on installing the permanent pony truss replacement.

According to Jim LaCroix, project manager for the structures division of the Vermont Agency of Transportation (VTrans), the temporary bridge should be in place by mid-December of this year. 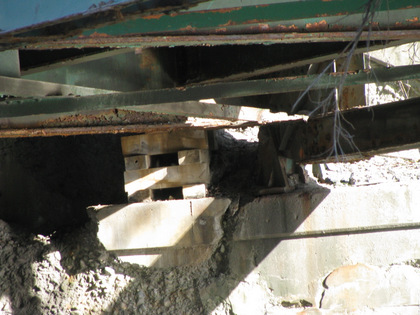 Once it is built, the crew will work on rerouting the road through it, and during this time—depending on equipment use—Route 100 may alternate between one- and two-way traffic. Once the reroute is complete, the temporary bridge will have 24/7 two-way traffic.

Construction crews will work intermittently throughout the winter on disassembling the existing bridge and preparing the site for its permanent replacement. The replacement should be installed by October 25, 2013.

The 1929 bridge will be removed next spring and although it has been offered to the public, LaCroix said that he didn’t think there had been any takers. He said that typically the state will offer these aging historic truss bridges to the public and that they are sometimes used for non-vehicular traffic on bike and pedestrian paths.

If no one has a use for the Kingsbury bridge, it will be destroyed after the Agency of Transportation ensures that the bridge is properly photographed and documented for the state historic structures division.

After that, the temporary bridge will need to be removed and sent back to its rental company and the entire project should be completed by June 13, 2014.