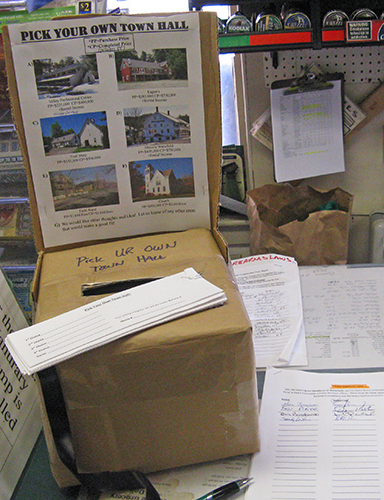 A second petition has surfaced in Waitsfield calling for voter action regarding the town's plan for new town offices.

A Town Meeting bond vote for $1.6 million to build new town offices on a parcel of land in the village known as the Farm Stand parcel failed by a vote of 351 no to 229 yes, with 8 ballots left blank.

At two subsequent select board hearings the topic of what should happen next led to heated discussions. A group of citizens who want the town to vote again on the issue and present voters with two choices, the Farm Stand parcel, now reduced to $1.3 million, and the former Methodist Church in the village for $2.1 million, is collecting signatures to ask the town to hold the new vote. The petition also calls for the town to apply for a $750,000 Community Development Block Grant Disaster Recovery Funds to help relocate the town offices.

Meanwhile, a second petition showed up at local stores last week that reads, "We the undersigned (resident of Waitsfield) ask the select board of Waitsfield to form a new task force to find a reasonable solution for town offices. There must be viable options between the current basement conditions and the luxury options proposed."

That petition was created by local realtor Neil Johnson who also created a ballot box and a ballot that reads "Pick Your Own Town Hall." The ballot lists six sites for potential town office sites including space at The Valley Professional Center, the former Egan's Restaurant, the former Troll Shop, the Waitsfield House, the Farm Stand and the former Methodist Church.

Those who created the first petition plan to present it to the select board at the board's April 8 meeting in hopes of having a town vote held as soon as possible so that the town can apply for a Community Development Block Grant Disaster Recovery Funds while there are still funds left to disburse.

The town offices are in the basement of the library and were flooded during the flood of 1998 and again during Tropical Storm Irene in 2011. The space is not handicapped accessible and the vault is too small to hold the town records. Additionally, the septic system at the library is not functioning properly.