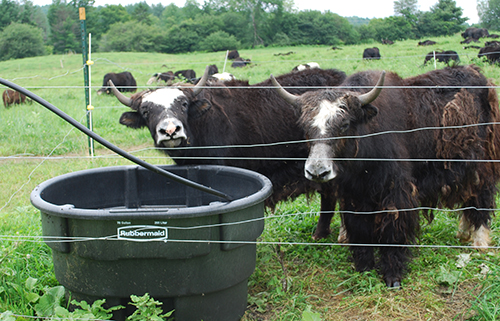 After five years of raising yaks at Steadfast Farm in Waitsfield, the Vermont Yak Company has sold its herd and ceased operations as Vermont's first commercial yak meat business.

"We enjoyed a fantastic five-year run and grew our herd to twice its original size, from 24 to more than 50 yaks," explained Vermont Yak Company co-owner Rob Williams.

"By early 2013, our farm business grew to a point where we had to either get bigger or get out, so we ultimately decided to sell our herd this spring and move on to other projects," he added.

Vermont Yak Company, consisting of co-owners Dave Hartshorn, Susan and Ted Laskaris, and Kate and Rob Williams, brought the first herd of 24 yaks to the Mad River Valley in April 2008, trucking them in from Cold Spring, Minnesota.

For five years, they raised grass-fed yaks and sold yak meat at the local Waitsfield Farmers' Market, through a CSA, to restaurants as far south as New York City and to retail customers through the overnight mail as far west as Albuquerque, New Mexico.

Yaks from their herd have been sold to new yak farms in central New Jersey and north central Pennsylvania for lineage development due to their superior DNA, and to a young farm couple in Highgate, Vermont, who are going into the yak business.

"We are excited that a group of our yaks will remain in Vermont and the new owners plan to continue a grass-fed yak meat business, so yak-loving Vermonters will still be able to find delicious and nutritious yak meat here in the Green Mountains," said Williams.

"The Vermont Yak Company would like to thank friends, neighbors and the greater Mad River Valley community for their support of our agri-preneurial start-up these past five years; we are deeply appreciative of our remarkable localvore-loving foodie and farming community."