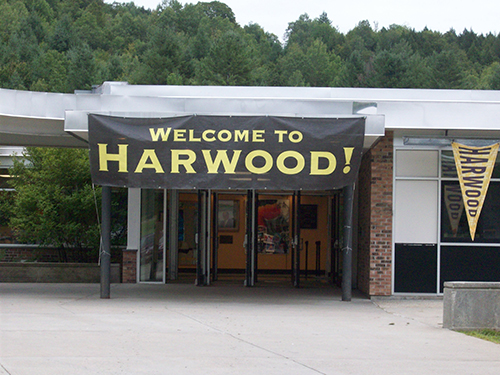 Harwood Union Middle School and High School will re-open tomorrow, May 3, after closing for cleanup for two days following an act of vandalism that flooded the school with approximately 8,000 gallons of water early in the morning on May 1.

Although the school will re-open, the middle school doors will not be accessible. Students and parents can gain entrance via the south side and main doors.

According to Washington West Supervisory Union (WWSU) superintendent Brigid Scheffert, “We do not have an early estimate of the cost of the damage,” she said, but it was significant. The flood was caused by the breaking and removing of toilet valves and the taping of floor, sink and water fountain drains as faucets were left running.

As of Thursday, May 2, Scheffert had yet to receive an update on the investigation by the state police. School officials are currently reviewing the building’s surveillance cameras, but “there seems to be some confusion,” Scheffert said. Harwood Union has a few outdoor cameras surveying the south side of the building in the direction of the bus barn. “The footage from those cameras has been thoroughly reviewed and shows nothing,” Scheffert said.

This is the fourth—and most significant—act of vandalism inflicted on Harwood Union this year, and “the two co-principals and I are interested in re-engaging the dialogue around the pros and cons of camera use,” Scheffert said. In the meantime, anyone with information surrounding the incident is encouraged to make a report directly to the WWSU superintendent, the Harwood Union administration or the Vermont State Police.

Vandals flooded Harwood Union with approximately 8,000 gallons of water causing extensive damaging and closing the school on May 1 and 2.

"I am saddened to report to our communities that a serious act of vandalism occurred at Harwood Union Middle and High School in the early morning hours of Wednesday, May 1st. I was notified by Co-Principal Atwood, at approximately 5:45am, that both she and the Vermont State Police were on their way to the school following a report by the maintenance staff that several areas of the building appeared to be flooded," said Washington West Supervisory Union superintendent Brigid Scheffert.

"At this time we know that approximately 8,000 gallons of water flooded Harwood Union as a result of vandalism that involved a number of toilet flow valves being removed and damaged throughout the building. In addition, floor, sink and water fountain drains were heavily taped shut with duct tape and faucets, water fountains, and the like were left on to run wide open. The front lawn was also heavily damaged," Scheffert explained.

The damage is significant, widespread and costly, the superintendent said. As The Valley Reporter went to press on May 1, both the insurance company and professional cleaning crews were on site and working.

No members of the public or the press were allowed in the school to take a picture and Scheffert said that the school's exterior cameras were functioning but did not reveal any details about the interior cameras or the investigation.

In a Twitter post on Wednesday afternoon, Washington West director of curriculum Sheila Rivers reported that Harwood would also be closed today, May 2.

"I want to recognize the swift response and hard work that the entire Harwood maintenance team has engaged in since first being notified; this has minimized the impact of the situation. Their efforts are invaluable and much appreciated," she added.

Scheffert said that she made the decision to close the school on Wednesday later than such decisions are usually made because her information was incomplete earlier in the morning.

"Therefore, I made the decision to close Harwood Union Middle and High School for the day; the decision came later than customary because the information was only preliminary. I regret that I was unable to provide more detailed information in the AlertNow message at that time, but the facts were simply not known. It was essential, given the late time of the morning, that school was cancelled based on necessity and safety. When unfortunate situations like this occur, I will do what I can to communicate detailed information out to our communities as soon as possible," Scheffert said.

Anyone with information is encouraged to make a report directly to the WWSU superintendent, the Harwood Union administration or to the Vermont State Police.