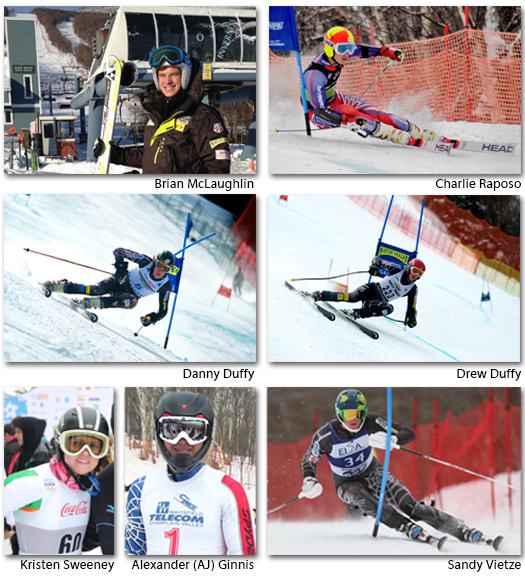 Sandy Vietze, 2011; Alexander (AJ) Ginnis, 2011; Brian McLaughlin, 2012; Danny Duffy, 2012; and Drew Duffy, 2013; are headed to Park City, Utah, to begin the 2013-2014 ski season as members of the U.S. Ski Team. Vietze and McLaughlin have been nominated to the C team, each after a successful post-graduate year at GMVS. McLaughlin is ranked second in the nation, for his age, in three disciplines, while Vietze is second in slalom and third in downhill.

Danny and Drew Duffy and AJ Ginnis will ski with the development team. The Duffy brothers each have the distinction of being the top-ranked skier, for their ages, in the nation in giant slalom. Both have at least two other top-five rankings in the other disciplines. Ginnis has returned to snow after injury kept him out of gates this past season. He is currently the top-ranked slalom skier for his age in the nation and seventh for his age in the world.

Kristen Sweeney, 2013, a member of the Irish National Alpine Ski Team since 2010, will remain an active team member through the 2014 ski season. Sweeney was awarded an Olympic scholarship for the 2014 Olympics in Sochi. The funds will be used for training, racing and travel costs associated with qualifying for the Olympics.

Charlie Raposo, 2014, a member of the British Junior Ski Team, has been nominated to the British U18 National Team. He is currently ranked third in the world in GS for boys born in 1996.

Steve Utter, GMVS alpine director, has known and worked with the Duffy brothers and Vietze since they were in elementary school and with McLaughlin, Ginnis, Sweeney and Raposo since high school. "I am impressed with and proud of the persistent, positive effort these athletes have put into their endeavors over the years and wish them continued success at the next level," says Utter.