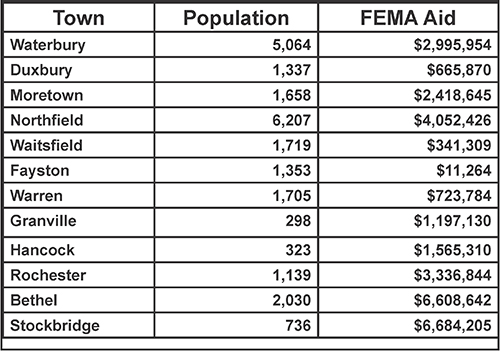 So far, the Federal Emergency Management Agency (FEMA) has spent $185 million on relief and recovery in Vermont in the aftermath of Tropical Storm Irene. Of that $185 million, just $4,160,872 – or 2.25 percent – went to the five Valley towns of Moretown, Duxbury, Waitsfield, Fayston and Warren.

This data was collected as part of a newly released Vermont Public Radio (VPR) study, "Mapping the Money: FEMA," which looks at where Irene aid came from and where it went.

Money given directly to towns and homeowners accounts for $142,356,927 of the state's $185 million FEMA total, while money given to government agencies accounts for $40,625,744. Of those state agencies, the Vermont Agency of Transportation (VTrans) received by far the most funding, with $21,682,364 going to repair state highways and roads.

As residents continue to clean out houses, farmers replant fields, construction crews fix bridges, and Waterbury, Waitsfield and Moretown look to rebuild their town offices, the study helps give each community's struggle some statewide perspective.

For a further breakdown of FEMA relief and recovery money, visit vpr.net/apps/mapping-the-money/fema.