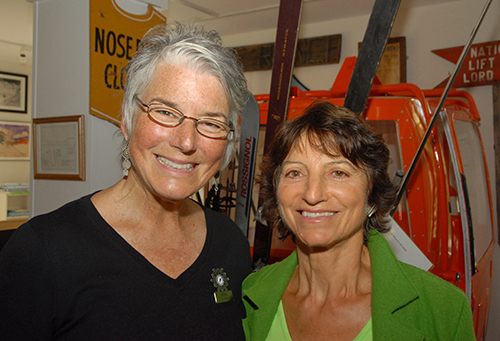 The purpose of the Trailbreakers is to honor former members of the board of directors and other significant supporters who the museum's board believes worthy of permanent recognition. The other Trailbreakers are Scott Noble, Julie Egenberg, Rosie Fortna, Liz Weller, Dick Collins and Sylvia Pope.

Rosie Fortna of Waitsfield and Stowe was a board member from 2002 to 2010. A 1968 Olympian, she organized nine Hall of Fame induction ceremonies, the Austrian celebration raffle, plus helped with the golf tournament and the original capital campaign. Also at this event, director/curator Meredith Scott presented her with her official plaque from her recent induction into the Harwood Union High School Hall of Fame.

Liz Weller from Moretown joined the board from 2003 to 2008. She served as secretary from 2004 to 2007. She began volunteering in 2002 for the grand opening and worked on countless projects including the exhibits Sugarbush: 45 Years of Skiing and the Vermont Ski Academies.

Between May 2012 and May 2013, the museum raised $50,023.14 to fund exterior and exhibit improvements. The museum now houses a large-scale, in-depth exhibit on the first floor; for 2012-2013, the exhibit is One Track Mind: A Celebration of Snowboarding from the Burton Archives. A John M. Bissell Foundation grant allowed the museum to put all of the Hall of Fame documentaries into one touch-screen exhibit.

For more information visit www.vtssm.com. The museum is open noon to 5 p.m. every day but Tuesday.