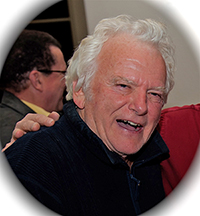 Charlie Brown, a resident of Warren and The Valley's local documentarian, will be speaking at the opening reception of the 24th annual Photo Show in the Round Barn on August 1. The reception is from 5:30 to 7:30 p.m. and is open to the public. Many Valley residents know of Charlie's work through his production company. He has produced slideshow presentations honoring such Valley residents as Arthur Williams and Henri Borel. He was able to raise $1,500 for Irene relief selling DVDs documenting Irene's fury. He also accompanied an early Project Harmony trip to Russia to record on film the activities of a group of Vermont high school students.

Charlie grew up in Philadelphia and graduated from Temple University with a degree in business administration. His first job was with a management consulting firm in Philadelphia specializing in computer operations back in the days of punch cards and three-inch-thick computer reports. He was sent on assignment to Hollywood, Florida, where he discovered that this was not how he wanted to spend the rest of his life. It was then that he decided that he needed a year off to develop as a ski bum. His year took him from the mountains of the west to the sunny beaches of Mexico.

Before he headed for the hills, Charlie had established a contact with Revlon in New York and on his return he visited their headquarters for interviews. During one of the interviews, he was asked what he would be thinking about when the snow first began to fly. At that moment, Charlie realized that corporate New York was not for him.

It was on a cold winter evening in 1964/65 that Charlie arrived in the Mad River Valley at the Blue Tooth, where the icicles were nearly touching the ground, a fire was ablaze in the hearth and a band was playing. It was love at first sight and sound, and it was here that he knew he had found a home.

Early on in Vermont as a 20-something, he found the ideal life for himself – washing dishes in the morning, skiing during the day and waiting tables at night. In time, Charlie became involved in many of the mountain's hospitality businesses including several positions at the Sugarbush Inn including sales manager.

Charlie then returned to one of his first loves, the Blue Tooth, when he became a principle in the business. During that time in Vermont, you could not serve alcohol on Sunday unless you also served food. To stay within the law, the Blue Tooth "rented" sandwiches which apparently did not sell very well, in fact, he doesn't remember that any were sold.

Somewhere along the way, Charlie discovered photography when he borrowed a Nikon 35 mm SLR camera from a friend. Charlie was involved in organizing the Ski Bum of the Year competition, which may well have been the first photo show in The Valley, with photographs of the contestants posted on the restaurant walls.

Charlie's other adventures on the mountain included organizing a wet T-shirt contest. The word went out, the people came but no one volunteered to be a contestant. Charlie was also involved in a major pillow fight in the Boar, a basement music club at the inn, as a willing if not eager participant with flying feathers and splatting whipped cream.

The next step in Charlie's career path was the formation with a few friends of Dream On Productions, an advertising and promotion firm. One of their first ventures was the promotion of the bicentennial in 1976. The plan was to unfurl a 400-foot American flag from the Verrazano Bridge to greet the tall ships as they arrived. The only problem was that the massive flag acted as a huge sail setting off alarms forcing the engineers to temporarily close the bridge. The flag was then cut in vertical strips to let the wind blow through allowing the bridge to re-open. The flag strips wafted in the wind like a convention of hot air balloons.

Much of Dream On Productions involved taking still photographs and putting them together in a slideshow format. Some of their clients were Norwegian-American Cruise Lines, Princess Hotels International and in 1980 the Winter Olympics in Lake Placid. Charlie was in the arena when the USA hockey team defeated the Russians. He was involved in presenting a slideshow of the game honoring the team at the Waldorf Astoria. In time, Dream On Productions dissolved and Charlie formed his own business, Charlie Brown Productions, that continues to this day.