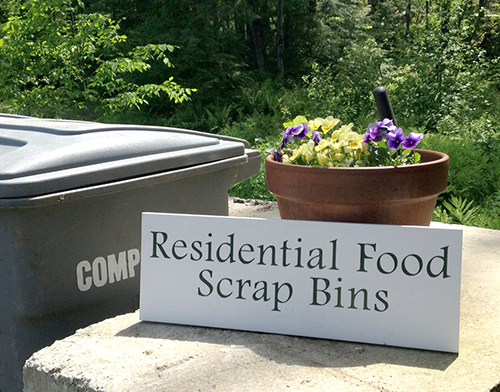 Grow Compost of Vermont, Moretown, producers of compost and soils, is accepting residential organic waste at no charge, the company announced on August 1. Households throughout central Vermont and beyond are able to drop off their food scraps, including meats and prepared foods, at Grow Compost, where it will be folded into their eight-acre Vermont Organic Farm-certified composting operation. The company is poised to accept an increase in food scraps as households prepare for Vermont's Act 148, the law prohibiting recyclables, including organic matter, in the Vermont wastestream by 2020.

The public is able to drop off their food scraps at their convenience. The Residential Food Scrap drop-off is open for self-service 24/7 and is located next to "the shack," the retail office for Grow Compost.

"Recycling food scraps—rather than throwing them away—will be a new process to many folks. It's not new to us; we've been doing this successfully since 2008, and we want to help make this change as easy as possible for our community," says Scott Baughman, co-owner of Grow Compost.

"Lisa and I started this operation because we are dedicated to producing excellent, agricultural-grade living soils and believe in the benefits that stem from composting, both in the garden and in the larger environment," says Scott. "It makes sense that we offer our skills and services as the state navigates a new way of dealing with waste."

Food is estimated to comprise one-quarter to one-half of household trash in Vermont and, once placed in the landfill, generates methane, a gas estimated to have heat-trapping properties 25 times stronger than carbon dioxide. Diverting food scraps (also known as organic waste) from the wastestream into the agricultural stream goes above and beyond reducing landfill use and methane emissions; the resulting compost has great value in itself.

"The soil can only give back what we put into it," says Lisa Ransom, co-owner of Grow Compost. "The result of our hard work, after a year-long process, is a rich humus, packed with nutrients and microbes. It's called gardener's gold for a reason—the benefits of adding compost to your garden are lengthy!"

The company expects to continue making agricultural-grade compost to their same high standards as inputs from households increase. In order to do this, Grow Compost only accepts food scraps without contamination. Plastic bags, rubber bands and fruit stickers are prohibited. (See chart below for allowable organic materials.) In cases of contamination, Grow Compost will omit affected inputs from their composting process.

Grow Compost of Vermont, established in 2008, currently generates about 5,000 cubic yards of compost each year and operates according to Vermont Organic Farmers standards to grow organic. In addition to providing compost, they make and sell other living soil blends and offer educational tours and workshops about the composting process and applications. They also offer hauling services for commercial food scrap collection used by many businesses and schools in central Vermont.

Grow Compost is open for retail sales Tuesday through Saturday, 8 a.m. to 6 p.m. Households can drop off their food scraps at any time. For more information, contact Grow Compost at 882-8154.