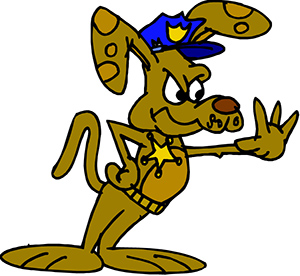 Plagued by frequent offenders, the Waitsfield Select Board is considering changes to its dog ordinance that give it more teeth, including the ability to levy fines.

The board will discuss the proposed changes at its November 11 meeting.

"At this point, it's a work in progress. We want to add provisions about certain properties in the town where dogs are not allowed – the polo field, the Lareau Swimhole, the cemeteries. We're also exploring enforcement measures that don't include using the state judicial bureau for a ticketing system," explained town administrator Valerie Capels.

"There are alternatives for using tickets for enforcement. We can issue tickets with the select board as the adjudicating body versus the state judicial bureau. There are a lot of repeat offenders who need to be dealt with," she added.

A draft of the proposed changes includes definitions of "running at large" which is defined as a dog that is not on a leash, in a car, on the owner's premises or the premises of another person with that person's permission and under the verbal or nonverbal control of the owner or hunting with the owner.

The proposed ordinance also expanded the requirement that dogs be wearing collars with their license tag attached to include "a dog that is visiting from out of state must wear a collar or harness with a current license from its home state attached."

The ordinance creates a section to deal with barking dogs that disturb the peace and dogs that run at large and dog owners who don't clean up their dogs' feces. It prohibits female dogs in heat from not being confined to a building or other secured enclosure except while under the control of the owner.