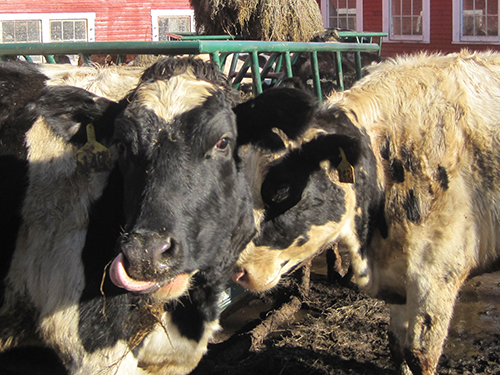 Throughout The Valley many people take advantage of local food producers, stopping by farms on their way home from work to pick up a dozen eggs, a pound of honey or a gallon of raw milk, unaware of the state laws regulating the sale of those products.

In 2009, the nonprofit farm advocacy group Rural Vermont helped pass H.125, the Unpasteurized (Raw) Milk bill, which legitimized sales of raw milk. The bill acknowledged that the locally based food system required different rules than the industrial food system, yet many farmers feel those rules are too restrictive.

In The Valley, Simplicity Farm and von Trapp Farm in Waitsfield both sell raw milk directly to consumers. Doug Turner, the owner of Simplicity Farm, said he sells about 10 gallons of the unpasteurized dairy product per week to people who come to his certified organic farm with their own containers.

According to Turner, not providing containers "eliminates some of the regulation they'd have me do in terms of labeling," he said, but he still has to abide by what he sees as other "silly" regulations. "One of them is I have to put a sign in my milk house warning you that drinking raw milk could kill you, or your unborn child," he said, explaining that such "scare tactics" are designed to make raw milk sellers look like the bad guys.

Even more burdensome than meeting all labelling and signage regulations, however, is meeting those regulations that require annual blood testing for animals. "The tests are expensive," Turner said, and he has yet to see scientific evidence that proves they need to be done every year.

Farmers who adhere to the regulations imposed by H.125 and obtain tier one classification can sell up to 12.6 gallons of raw milk per day but are not allowed to deliver milk or sell it in stores or at farmers' markets. Tier two classification allows farmers to sell up to 40 gallons of milk per day and to deliver some milk locally, but only two farms in Vermont have managed to obtain it.

As Rural Vermont prepares to introduce a more broad-based bill into the state Legislature for 2014, the group hosted a raw milk summit in Bethel last month, at which over 60 farmers and consumers came together to state their case for more flexibility in the production and sale of raw milk.

Raw milk, by definition, is milk that has not undergone homogenization or pasteurization—both processes that kill bad bacteria. Homogenization and pasteurizaion also kill good bacteria and enzymes that help humans digest food and some raw milk advocates say their absence in store-bought products is why so many people today have trouble digesting dairy.

In fact, "many of my milk customers have come to me because they have a member of their family that is—quote-unquote—lactose intolerant," Turner said. "And I haven't had anybody tell me that [drinking raw milk] didn't work for them."
Although many argue for the nutritional benefits of raw milk, the Center for Disease Control and Prevention in Atlanta warns of its health risks.
"Raw milk can carry harmful bacteria and other germs that can make you very sick or kill you," the Center said. "Many people believe that foods with no or minimal processing are better for their health; however, some types of processing are needed to protect health."
While raw milk is not pasteurized, it must be properly cooled and cut before it's sold to consumers, Turner explained, and states such as New Hampshire have already passed legislation allowing the sale of raw milk at farmers' markets.

For Turner, raw milk sales make up less than 1 percent of his annual income, but he offers it "as a service to people in The Valley who care about health issues," he said, "and to people who realize that raw milk tastes so much better than store-bought."

Martina Anderson of Granville buys raw milk regularly for her and her family at von Trapp Farm. "It tastes much better," she said, "even my 4-year-old son can tell the difference." As far as health risks, "I'm never worried," Anderson said. "This is what our great-grandparents grew up with."

Anderson also appreciates that raw milk allows her to support local businesses. "I pay a fair price at the farm and no other corporation is involved," she said.

In the past, Turner has been contacted by local restaurants and schools about using his milk, but to deliver and sell larger amounts of raw milk, Simplicity Farm would have to meet even stricter regulations. "We chose not to go that way," Turner said, which is too bad, "because I think it'd be great for the schools."