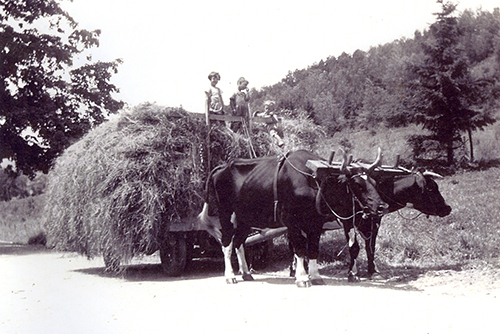 Thanksgiving. What a wonderful holiday. As immigrants to the U.S. into Vermont's New England traditions, we as French Canadians did not practice the holiday of Thanksgiving. It wasn't too many years after we kids were in school that that changed.

We started to tease mom to celebrate along with everyone else, learning this from school. Having a holiday in the middle of the week more or less was rather hard on mother. She had no real help to get the extras ready. She was the only one to make the pies, get and kill and pluck the chickens. We had chickens, no turkeys back then. A nice fat homegrown hen sure makes a great-tasting dinner.

Of course it was roasted in a woodstove. Let me tell you, food cooked in or on a woodstove tastes so much better on average than on a gas or electric stove. You just have to have patience as it is slower and very hot at times in the kitchen. Soups and stews are great. Mother used to make the best baking powder biscuits in that oven. I learned to make and bake a plain yellow cake from scratch at the age of 6.

Back then we also used lard and bacon drippings to cook with. Real butter we bought from a neighbor, Mable Henry. They had Guernsey or Ayrshire cows and she churned once a week. Butter was 10 and 15 cents a pound. She had a big table churn that held 2 gallons of cream and that takes quite an arm to turn the handle.

Since we all had spring-fed water supplies, working the butter after it was churned was easy. You need real cold water to finish off butter. Otherwise it gets soft and sticky and sticks to your hands and paddle. You have to knead butter somewhat like bread dough to get all the buttermilk residue out. After you'd done that, you had to package it, either in containers or brick it up in pound loafs. I used to freeze mine when done. And don't forget the salt. Salt also helps set the butter up. Just don't put too much in it.

We always had pumpkin and apple pie and also blackberry. We always had canned blackberries. Of course we had all the cream we wanted for whipped cream. We weren't rich, but we ate well. That's the thing with a farmer – they almost always grow a lot of their own food. We butchered our own beef, sometimes a pig, and tried on getting a deer during season.

My brother Armand and cousin Dick Viens of Connecticut have both seen real nice bucks while hunting, but neither one was able to get a shot off. White tail deer are real wily and they're fast on their feet, but it's fun trying to best them. Not just to shoot one but just to see one. Sometimes the story of their antics makes for quite a tale.

It's the last week of November and we'll be into December – everyone getting ready for Christmas. Time just seems to fly, fly, fly. I must be getting old.

For we kids at the North Fayston school it was a time of fun and excitement. We were getting ready for our Christmas shows. There were presents to make for our parents, parts and carols and poems to learn, decorations to make and put up, and murals to draw on the blackboards. We all drove our mothers crazy finding the materials we needed for what we were going to make as gifts and our costumes for the plays. We always put on a show of 60 to 90 minutes for the whole community. That was the night grandparents and babies came.

The upstairs was our classroom back then with the big wood furnace and the kerosene window lamps. We'd have a big spruce tree in one of the back corners, decked out in colored paper decorations and aluminum foil and glass balls that people donated. We were careful to put everything away properly after the holiday was done. Santa always came bouncing through the door with a big ho, ho, ho. Toddlers squealed and the rest of us all gasped. The anticipation was palpable.

As the school got smaller with less and less students, of course this all stopped, but until I graduated from eighth grade, that's the way it was. How much our kids miss out on now.

Here's wishing you all a wonderful Thanksgiving with family and friends and the upcoming holidays in December. See you all next time. Peace.