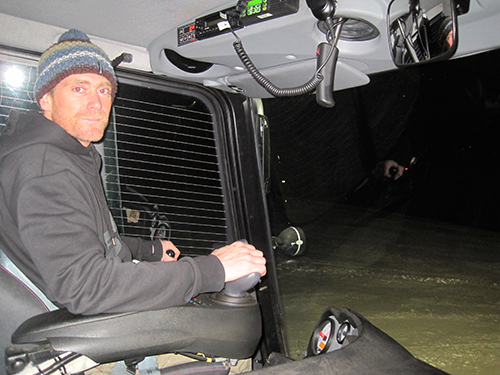 "When it's snowing out, you go really fast," Sean Flynn said, steering a multi-ton machine down a steep ski trail, leaving a line of nearly perfect corduroy in his wake. "Those are the fun nights."

Every evening from 4 p.m. to midnight, Flynn drives up and down Sugarbush's Lincoln Peak in a groomer "that can go just about anywhere," he said, guiding the machine over a ridge across the trail and filling in a gully on the other side of it. The blade on the front of the groomer pushes snow from the sides of the trail back towards the center and levels it and the tiller on the back draws shallow lines across its surface. 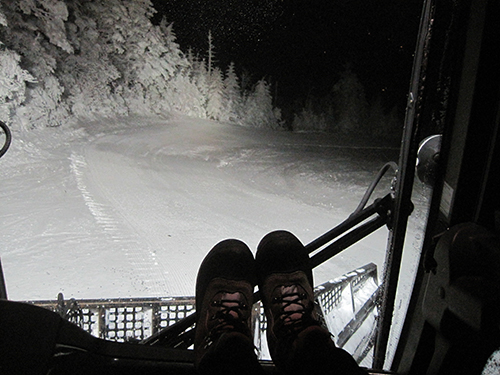 Flynn has worked as a groomer at Sugarbush for over a decade and some of his coworkers have been there even longer. "We have a really good crew, with a really low turnaround rate," he said. "Everyone who's here has been here for years."

Learning how to operate a groomer "takes years," Flynn explained, "because there's really nothing else like it." The machines go slow—only three or four miles per hour—and are impossible to tip, but achieving a flat, even end result on a trail takes a lot of practice.

"It helps that I know the mountain really well," Flynn said, explaining that during the summers he works at Sugarbush building downhill mountain bike trails. "I have a pretty good idea where all the rocks are," he said. But of course, "everything looks different at night."

Flynn likes working as a groomer because "I can ski every day," he said, explaining that he gets back to his home in Warren by 1 a.m. and is usually back up in the liftline that same morning.

According to Flynn, to be a good groomer "you definitely have to be a skier," he said, "because you see the trails in a different way. You groom them how you'd want to ski them." 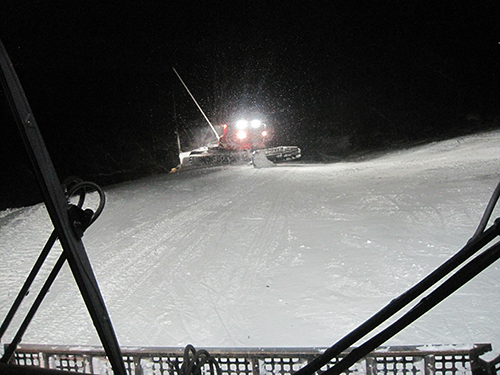 There's also something fun about figuring out how to get all of the trails finished before daybreak, Flynn said. Every afternoon the groomers receive a map of the mountain with all of the trails that they need to do that night highlighted. "It's kind of like a big puzzle," Flynn said, as he and three other groomers work the first shift covering as much terrain as possible, and four more groomers cover the rest from midnight to 8 a.m.

The cabins of the groomers are heated and "once they get warm, it's pretty cozy," Flynn said. He listens to Howard Stern on satellite radio as he works, looking out over thousands of tiny lights across The Valley below. "On a clear night, you can see all the way to Burlington and Plattsburgh," he said.

Around 8 p.m.—or "lunch break," as Flynn calls it—he and the other groomers meet up at Allyn's Lodge at the top of Super Bravo chairlift to eat food and sit around the fire, before going back out to push snow over patches of ice.

The skier in Flynn sometimes regrets grooming a trail with good, natural snow, but in the end it "makes the snow last longer," he said, "which isn't a bad thing."