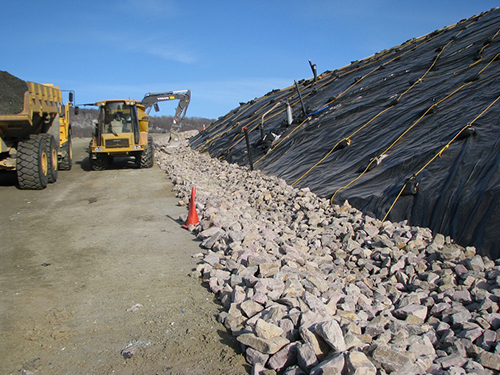 Moretown Landfill closed its gates this past summer, but the trash torch still burns at the entrance to the Route 2 facility and its owners, Advanced Disposal Services, have submitted a new application to construct a fourth trash cell on site.

On November 18, Advanced Disposal submitted a new application to construct Cell 4, but the future of the facility will still be subject to approval by the Agency of Natural Resources (ANR), the Act 250 Commission and the Moretown Development Review Board (DRB).

Last year, the DRB held a series of public hearings concerning the facility's first Cell 4 application, which was submitted by Moretown Landfill's previous owners, Interstate Waste Services. When Advanced Disposal took over ownership of the facility last September, it continued the hearings until eventually withdrawing the expansion application to focus on bringing the existing facility into compliance following a string of environmental violations issued by the ANR.

This past September, the Environmental Division of Vermont Superior Court approved and entered a consent order that affirmed the ANR's March 2013 denial of Moretown Landfill's application for certification renewal, which the landfill had appealed.

The consent order prohibits Moretown Landfill from accepting waste and requires the Route 2 facility to cap its cells, to investigate and remediate groundwater contamination and to draft and implement an ANR-approved odor control plan. In other words, the consent order "requires prompt and orderly closure along with extensive remedial efforts ... to ensure that the landfill will not negatively affect nearby residents or the environment," ANR Department of Environmental Conservation commissioner David K Mears said.
The landfill had already begun undertaking such closing procedures this past July, when the consent order was negotiated but had yet to be approved. The order, which the attorney general's office in collaboration with the ANR negotiated with Moretown Landfill, was not opposed by any of the several nearby and neighboring landowners who participated in the litigation.

Under the consent order, the state reserves its rights to bring any enforcement action against Moretown Landfill for past violations of Vermont's environmental laws and regulations and to fully review any future application to dispose of waste in a new cell at the facility.