In Vermont, a drive down slope-side roads reveals old A-frame lodges with faded signs above their front doors. Some of them have lots of cars in the parking lot. Some of them are for sale.

"I think ski clubs are a thing of the past in a lot of places," Eric Friedman, director of marketing at Mad River Glen ski area, said, but that's not the case at the skier-owned cooperative.

Some of the ski clubs are more active than others, but "they're all so intertwined with the Mad River Glen community," Friedman said. The "ski-it-if-you-can" mountain celebrates its 65th anniversary this year and many of the clubs have been around just as long.

Before Mad River Glen opened, "there was really no bed base in The Valley," Friedman said, explaining that the area was still figuring out how to cater to increased tourist traffic. "People were staying on farms and things."

Most of the ski clubs at Mad River Glen were founded in the 1950s and 1960s as an affordable place for people living out of state to stay and ski for the weekend. Ski club members paid a yearly fee as well as a per-night lodging fee. 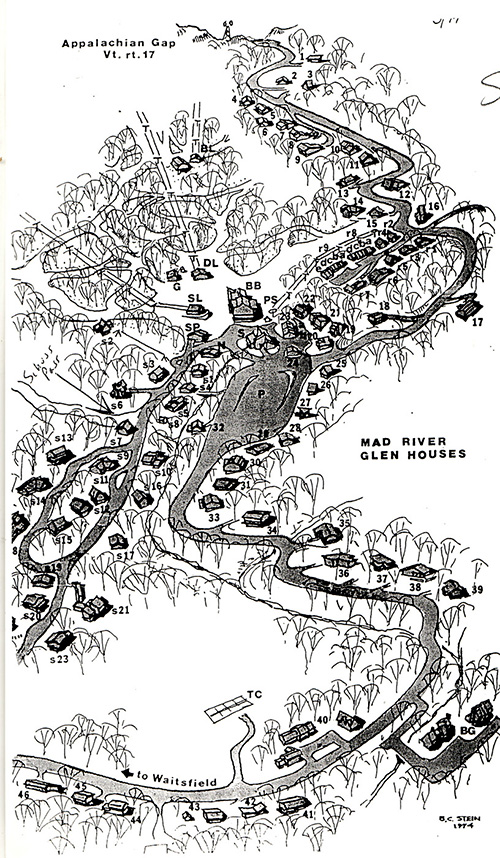 Ave Haviland of Fayston joined the White Plains Ski Club in 1958, when she was living in Westchester County, New York. Originally, the ski club would rent different houses near the mountain each season, but "people wanted to be able to be together," Haviland said.

So Haviland's husband Walt helped draw up the plans for the White Plains Ski Club lodge. It was constructed on Schuss Pass Road in 1967 and the Havilands have spent a lot of time there since.

"As the kids got older we were coming up here three out of four weekends each month," Haviland said, and so were a lot of other families. "If there were at least 12 to 15 people in the house we could have a cook," she said, and the ski club members would eat meals together on Saturday nights.

The ski clubs are "active social organizations," Friedman explained, with regular meetings, outings and other events. And what's more, "people identify with them," he said.

Kate Eaton of Fayston is a native Vermonter, but she had her first introduction to skiing at Mad River Glen through the Hartford Ski Club, based out of Connecticut. Her husband Ken's father was good friends with Mad River Glen founder Roland Palmedo, who encouraged him to start the club in the early 1960s to generate support for the new ski area. And it worked.

"It's a very tight-knit and—in a way—powerful community that we have here," she said. It's so tight-knit, in fact, "that many members of the ski club ended up living here."

"We don't stay in the [White Plains Ski Club] lodge anymore," Haviland explained, but she and her husband still maintain a connection with the group. "If our friends are there, we'll go over for dinner," she said, and "I've often gone up there to open the door for the chimney sweep or the guy who checks the fire alarm system."

Currently, "the club is a little smaller than it was back then," Haviland said. "We just got the new membership list and there are fewer people on it," she said.

Especially this year, the lack of snow has been frustrating for many ski club members hoping to get time on the slopes, "but there's a lot of determination to stick it out," Eaton said.

The ski clubs "have had their ups and downs," Friedman said, but it seems they've always been "cyclical," he said, and it's natural for the club size to fluctuate each year, as the older generations stop skiing and the younger generations start learning.

"Some of the members of the club aren't with us anymore, unfortunately," Haviland said, but today the club still "has a large range of ages, including little babies."