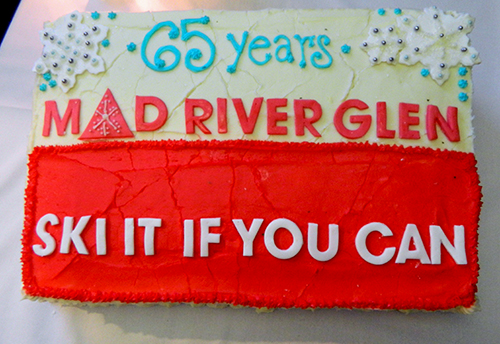 "My second date at Mad River Glen was with my would-be wife," one man said, pointing out a woman across the room.

"What about your first date at Mad River Glen?" the man sitting next to him asked.

"Oh, it was with some other girl," he answered.

On Saturday, February 1, Mad River Glen celebrated its 65th anniversary with vintage sweaters and stories in the Basebox Lodge. The sold-out gala drew Single Chair devotees only slightly older than the ski area itself, many of whom could remember skiing Fall Line in the years after it opened in 1948.

Among the anniversary's attendees, outfits ranged from colorful ski jumpers to sparkly velour dresses, but the accessories of choice were old season passes, some displayed by the dozens on chains around necks or clipped to suspenders.

Mad River Glen also dressed up for the gala, as the tables in the ski area's characteristically unadorned lodge were covered in white cloths and lit by tea candles and strings of Christmas lights. Bluesy covers of songs like "This Magic Moment" by Mint Julep set the mood inside, while a light but steady stream of snow fell outside.

In addition to dinner, a decorated birthday cake, a torchlight parade and an extended fireworks display celebrating the ski area, Mad River Glen honored longtime skier and supporter Jerry Muro, who came up with the mountain's moniker, "Ski it if you can."

"It's not hard... it's challenging," Muro said of his first encounter with the mountain's steep, mostly ungroomed terrain and last Saturday's turnout showed that—in the age of high-speed quads and snow guns—there are still a lot of skiers who share his good-natured pursuit of trails cut by hand over a decade ago.