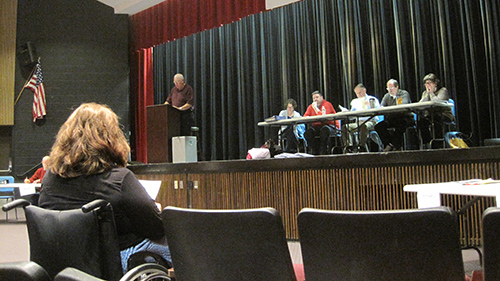 On Saturday, May 10, Duxbury taxpayers approved the appropriation of funds to pay the town's debt.

Over 90 residents took seats in the Harwood Union High School auditorium to vote on eight articles tied to the town's Capital Reserve Fund that were postponed at Town Meeting in March until Duxbury received the report from its 2013 financial audit.

Upon completion, the audit report showed the town still owed $228,142 toward a line of credit it took out to pay for repairs from Tropical Storm Irene that were reimbursed by FEMA. The FEMA funds, however, did not go to pay back the line of credit; they went into the town's general funds and were spent. The audit report also showed a $110,344 budget deficit for 2013, which includes a $41,710 deficit carried over from 2012. The deficit includes $228,142 that the town still owes on its line of credit and select board chair Dick Charland wanted voters to appropriate funds to pay that back and get rid of the deficit.

According to Duxbury Select Board chair Dick Charland, "If 2011 had never happened, we wouldn't be here," he said, speaking of the damage Duxbury incurred from Tropical Storm Irene. "No town in the state of Vermont was prepared for what took place," he said.

Following the storm, Duxbury took out a $1.5 million line of credit with Merchants Bank to pay for repairs to roads and culverts until it received reimbursement from FEMA. "We had to figure out a way to pay the bills and keep the contractors working," Charland explained.

All of the flood repairs were completed by the end of 2012 and FEMA reimbursed the town for $1.7 million—more than the $1.5 million it had originally promised. When the line of credit became due last October, however, Duxbury was $228,142 short.

"To the best of our knowledge, there were no funds misappropriated," Charland said. According to Bonnie Batchelder of Batchelder Associates, who performed the town's 2013 financial audit, the reimbursements Duxbury received from FEMA were used to pay for the town's operating expenses rather than flood repairs and Duxbury ended the year with a budget deficit of $110,344.

"I can't even find out how we did that," one resident said last Saturday, poring over the spreadsheets provided in an information packet distributed to residents. Former town auditor William Yacavoni was at the meeting and asked to speak, but he did not receive the required two-thirds majority vote from residents that's required to allow a nonresident to participate. Yacavoni has publicly stated that the town is not $338,000 in debt because the $228,142 line of credit is included in the $110,344 deficit shown in the Batchelder audit.

Instead, town treasurer Kym Andrews, who took over for former treasurer Ken Scott after he resigned last December, shared her understanding of the town's present financial situation. "The fact is we owe this debt," Andrews said. "My whole focus is just being able to move forward," she said, as the town needs to repay the line of credit by its extended deadline of June 30 of this year.

Ultimately, residents voted to appropriate the sum of $350,000 to pay the line of credit and to be applied to the town's outstanding debt. That money will be paid back at $70,000 per year for five years. Voters were not hesitant in expressing disdain for Duxbury's mismanagement of funds.

"The taxpayers have approved paying a burden for something we are not responsible for," one resident said last Saturday. "I have a problem with that."

While one resident suggested Scott could be to blame for the mismanagement of funds, "It's not one individual in charge of what we spend," another resident countered, as the town treasurer does not choose how to spend money but rather keeps track of where it's spent.

Moving forward, Duxbury does need to set up a system to ensure that the select board "is getting good, monthly accounts" one resident said, suggesting that the mismanagement of funds was in part due to a lack of communication between the town treasurer and the board.

EXCAVATORS AND OTHER ARTICLES

In purchasing the excavator, select board member Mo LaVanway explained, the town would no longer have to rent a machine. The excavator would be used to repair critical roads as well as for regular maintenance about seven to eight months out of the year. For the remainder of the time it would be available for the town in case of emergencies.

The cost of purchasing an excavator and renting one for about four or five months are about the same annually, LaVanway explained, although having the machine available year-round for emergencies could save the town a lot of money by allowing the road crew to act quickly on a problem before it becomes bigger and more expensive to repair.

All of the select board members supported purchasing the excavator except Marty Wells. Due to the town's current debt, "right now is not the time," he said. In the end, taxpayers approved the purchase of the excavator, voting 51 yes and 46 no via paper ballot.

In other road maintenance costs, residents approved an expenditure from the Capital Reserve Fund not to exceed $40,000 to replace culverts.

After a storm this past April, "there was a considerable washout from one end of town to another," LaVanway said, resulting in about 60 culverts in critical need of repairs. The expenditure could be eligible for reimbursement from FEMA, although when the town first approached the organization it was "not as receptive as we thought they would be," LaVanway said.

In total, repairing the culverts with the town-owned excavator could cost around $60,000, LaVanway estimated, and one resident asked why the select board was only asking for $40,000. "I would rather be very up front about what we spend as a town," she said, suggesting an amendment to the article that the expenditure not exceed $85,000.

Adopting a fiscal year calendar brings town payments into closer alignment with school and state payments and "brings our taxes to be paid closer to when our budget starts," select board member Amy Scharf said.

By asking voters to approve a budget before it is spent and after taxes are paid, Scharf explained, the town will have a better idea of its assets coming in to Town Meeting and hopefully less margin for the mismanagement of funds in the future.