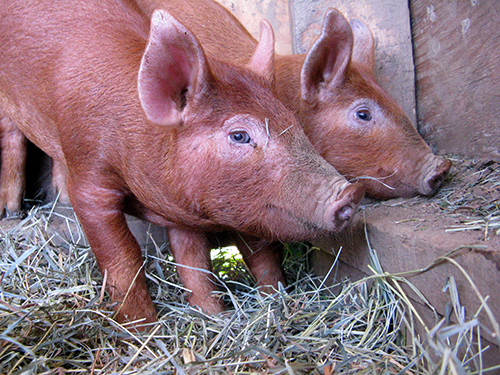 This summer, the state is starting to phase in the Universal Recycling Law (Act 148), which requires that all organic material—from wilted lettuce to lawn clippings—be diverted from landfills by 2020. The law passed the Vermont Legislature in June of 2012 and while some local businesses have been composting long before that, others have some work to do.

Throughout The Valley, many restaurants keep food scraps out of their dumpsters by giving them to employees, friends and family who raise animals. At the Mad River Barn in Fayston, co-owner Heather Lynds says that all food scraps from the kitchen go to staff who feed them to their chickens and pigs, and Bridge Street Butchery in Waitsfield gives their biodegradable waste to local farmers.

At Chez Henri in Warren, chef Tim Seniff takes food scraps home with him to compost, and Big Picture Theater and Café in Waitsfield is currently working on developing an on-site composting facility, where the soil they make can be used to grow greens and herbs for the restaurant.

Throughout The Valley, composting tends to take place on a backyard scale, but at least one commercial composting facility is taking in local restaurants' egg shells and broccoli stems.

Grow Compost, an organic composting facility on Route 2 in Moretown, personally picks up food scraps from a handful of small businesses throughout The Valley and the greater Stowe area. The facility also accepts biodegradables from local elementary schools and larger businesses such as Mehuron's Supermarket and Sugarbush Resort, which are collected by the Central Vermont Solid Waste Management District.

The Route 2 facility maintains contracts with the businesses they work with to ensure contaminants don't enter the compost stream. "We are very particular about what we take," Grow Compost co-owner Lisa Ransom said, "because our mission is to create healthy soil.... We don't want things like fruit stickers, rubber bands or wire ties."

While Grow Compost is approved by the Northeastern Organic Farming Association of Vermont (NOFA-VT) for use in organic crop production, the food scraps they accept are not necessarily pesticide-free. The end result is, however, high temperatures and frequent turning of the material helps to break down and eliminate unnatural chemicals. Thus, in addition to diverting waste from already overflowing landfills, "composting does a lot of work in cleaning up our environment," Ransom said.

Unfortunately, because composting does require more effort on the part of the business in checking for contaminants before sending waste away, Ransom suspects that not all restaurants are utilizing the process. With so much turnover in the food industry, it's hard to keep up with training new managers, Ransom said, and "it's difficult to change the way you do things."

As the state phases in the Universal Recycling Act, however, "We're anticipating that there will be more people that will be required to find a place to put their food scraps," Ransom said, and Grow Compost is expanding.

Even businesses such as the Mad River Barn, who already compost, admit they're only able to divert about 75 percent of their food scraps from the landfill, and that they're not sure what to do with things like meat and bones. Thus, in addition to increasing its intake capacity and hauling services, Grow Compost plans to increase its efforts to educate the general public about what can and can't be broken down into soil (meat and bones can, if processed correctly).

Currently, the Route 2 facility also provides a food scrap drop-off service for residents, who can bring their apple cores and coffee grounds to Grow Compost free of charge, and "Our community has been fantastic about keeping our stream pretty clean," Ransom reports.

Anyone interested in learning more about how to divert food materials from the waste stream may want to attend the Green Mountain Global Forum's day of dirt this Sunday, May 18, starting at 4 p.m. at Big Picture Theater in Waitsfield. For more information, see story on Page 12.