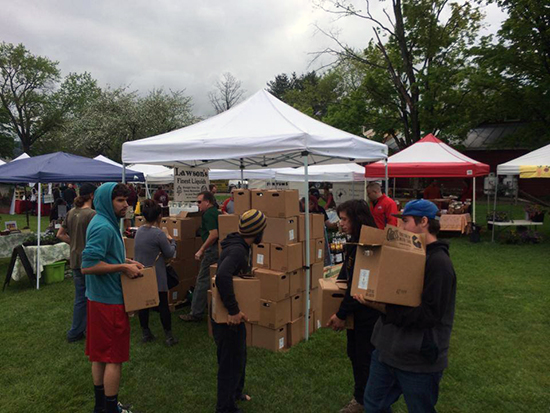 This Memorial Day weekend, hordes of beer-crazy Vermonters and visitors descended on The Valley to attend a trifecta of fermentation-related events.

On Saturday morning, people started lining up in the parking lot outside of The Mad Taco as early as 7 a.m. to collect a ticket to purchase bottles of beer from Lawson's Finest Liquids at the Waitsfield Farmers' Market later that day.

At 8 a.m., The Mad Taco tapped the first keg of the Warren microbrewery's newest concoction, Triple Sunshine IPA, for those who were waiting. They served it by the glass along with a breakfast buffet.

Later that morning at the farmers' market, ticket-holders bought up 22-ounce bottles of Triple Sunshine IPA, Ava IPA, Spring Fever Session IPA and Rum Barrel-Aged Stout at an unprecedented rate. Even with Lawson's two- or three-bottle minimum (depending on the variety) not everyone with a ticket walked away with a bottle.

Meanwhile in Waterbury, The Alchemist was setting up for its fourth pop-up truck sale, at which it sold cans of its two newer brews, Beezlebub and Focal Banger, by the four-pack and by the case. And starting at noon just down the road, Hill Farmstead Brewery of Greensboro celebrated its fourth anniversary at three Waterbury bars, taking over their taps with over a dozen varieties of its delicately balanced concoctions.

Standing in line for Lawson's or The Alchemist's beer or trying to catch a bartender's eye to order a five-ounce glass of Hill Farmstead prompted many exchanges between out-of-staters and locals, the most common of which was embarrassment on behalf of the Virginian who admitted to driving eight hours to be there and self-satisfaction on behalf of the Waitsfield resident who appreciates good beer but, thank god, is not that crazy.