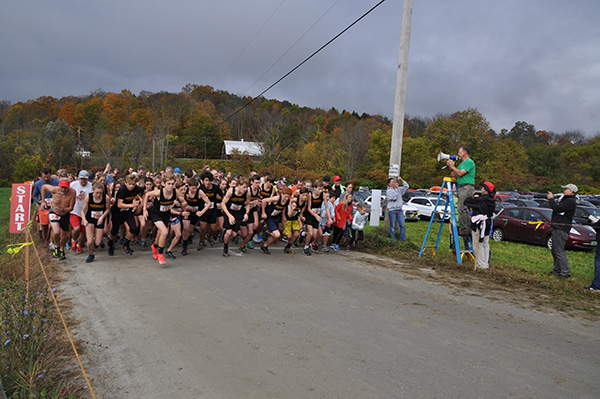 The 23rd annual Mad Dash – dedicated to Waitsfield’s Neill Farm family headed by Elwin and Angela Neill – took place under cloudy skies on Sunday, October 7, starting on Meadow Road in Waitsfield. Lead sponsors of the race included Sugarbush Resort and Blue Cross Blue Shield, along with about 40 other sponsors.

Some 458 runners and walkers registered for the event, plus approximately 60 Kids Fun Runners.

Harwood Union High student Brendan Magill (pictured with Harwood cross-country coach John Kerrigan) won the 5k footrace for the second year in a row. “I don’t require the students to run this race, but if there isn’t a competing meet on the weekend, they seem to love running the Mad Dash,” said Kerrigan. “They just connect to the community feel, the camaraderie.” Dozens of Harwood boys and girls ran in the event. 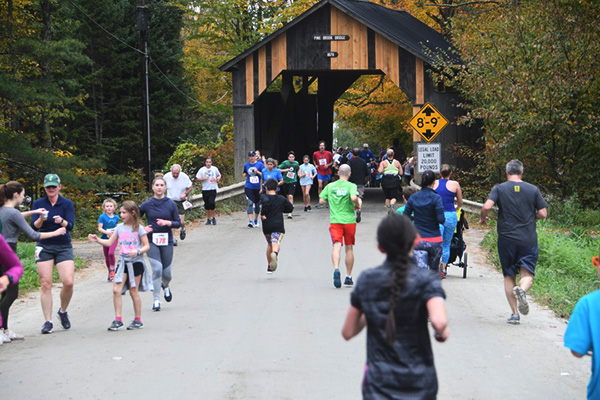 The weather was cloudy and the race commenced only minutes after the end of an overnight rain. Hundreds of runners amassed at the starting line as Neill started the race with a bullhorn. “Our family really enjoyed the race, just like the runners did,” said Neill. “It’s a nice community event.” The Mad River Path Association arranged for the winners’ medals to feature an imprint of the Neill Farm, which has hosted the tents, finish line and parking for the event for all of its 23 years.

“By working with the Neills over the years, we’ve been able to help bring this community together in good times and difficult times,” said Mad River Path board president Laura Brines. “This year it was great to honor Angela and Elwin and their family, including nieces and a grand-niece and grand-nephew who handed out the award medals after the race finished. And we helped draw some attention to the local farm economy.”

The Mad River Path Association urges people to “buy local” from area farms such as the Neills. A healthy farm economy can be a great complement to a healthy trail system. Many residents and visitors enjoy walking and running near or on The Valley’s farmlands and farm roads. One of the major concerns of local farms is that dog owners clean up after their pets and control them so that they don’t create pressure on farm animals.

Brendan Magill placed first in the 5K. The first female finisher in the 5K was Ava Thurston. Winner of the 10K was Caleb Kessler, with Jordan Gonda finishing first among female 10K runners.

Carl Lobel of Warren (pictured) attended the race as he has for most of the past 23 years. “I remember when it started, really glad it has grown into such a great community event,” said Lobel, who wore a mint-condition 2004 Mad Dash T-shirt.

In addition to Mad Dash T-shirts for the runners and Kids Fun Runners, the Dash included music by Phineas Gage, a musical duo featuring Rob Williams, who emcee’d the Dash. Food was provided by dozens of local merchants and producers, and was prepared by a team headed by Kristy Ketchel. The silent auction raised thousands of dollars for the Mad River Path Association, with donations of auction items by about 20 local businesses.

“I want to express particular appreciation to Liz Raddock, the Dash organizer again this year, who did a fantastic job orchestrating this huge event,” said Brines. “She really makes this event work, along with path association board member Betsy Jondro.”

“Next year, we know Dash runners will as always brave any conditions, overcome any challenges, because that’s what they do. They love the farms, the foliage, the food, and the fun,” according to Farquhar. “We call the Mad Dash ‘fun-omenal’ because it really is. Thanks to everyone who participated, donated, volunteered, organized, set up, and observed.”