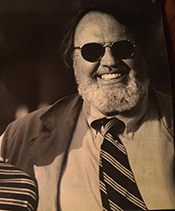 R. A. Montgomery, longtime Valley resident, passed away at home in Warren on Sunday, November 9, 2014, after an illness. He was 78 years old. Montgomery, known to everyone as Ray, first came to the Mad River Valley in 1956 to make use of the Williams College Outing Club cabin in order to ski. The cabin had been donated to the Williams Outing Club by Roland Palmedo, founder of Mad River Glen Ski Area. Ray and Roland soon became good friends. In 1958, upon graduation from college, Ray bought 10 acres of land in Waitsfield on Cross Road from Bover Graves. He set to work building a cabin there, where he spent as much time as he could in subsequent years as he pursued a career in education and role-playing game design in New York and Boston. He was finally able to move full time to The Valley in the early 1970s where he began a distinguished career in writing and publishing. Through his small company, Vermont Crossroads Press, Ray became the original publisher and a writer of a children's series he titled The Adventures of You. In 1978 he brought the series to Bantam Books in New York where they renamed the series Choose Your Own Adventure. "Choose" went on to become the fourth best-selling children's series of all time with over 250 million books in print in over 40 languages.

Ray was born and grew up in Connecticut where he also attended Hopkins Grammar School and then Williston Academy. After graduating from Williams in 1958, he was kicked out of Yale Divinity School the following year for spending too much time skiing and mountain climbing. Ray focused next on what became a lifelong passion – innovative methods of teaching young students. He first worked at the Wall Street Journal, going into classrooms to encourage teachers to use the Journal in their curriculum. Subsequently, he became assistant provost of Columbia University, working under Professor Jacques Barzun from 1963 to 1965. Ray founded The Waitsfield Summer School in Waitsfield, Vermont, in 1966. At the time, it was a revolutionary program aimed at children with learning challenges, in which the English curriculum was experientially based and gaming was used exclusively to teach basic math.

Ray's innovative work at The Waitsfield Summer School drew the attention of Clark Abt Associates, the famous Cambridge think tank, where he went to work in 1969. During this period, Montgomery developed a role-playing game for the Edison Electric Institute called The Energy Environment Game. The game asked players to assume various roles in a community; all had a stake in the outcome, trying to resolve the scarcity of electricity resources. It was used widely in high schools across the country during the first energy crisis in 1971. Ray also designed numerous innovative role-playing programs for training Peace Corps volunteers in cultural awareness and sensitivity. He traveled frequently to West and North Africa during this time to teach Peace Corps trainers his programs.

With a young family growing up in Vermont, Montgomery wanted to work closer to home. So he cofounded Vermont Crossroads Press with his first wife, Constance Cappel, in 1975. In addition to publishing The Adventures of You, Ray bought the first political thriller by local resident and novelist Doug Terman, The 3-Megaton Gamble. The book was pulled from the VCP warehouse before shipping so that Scribner's could officially publish it as First Strike in 1978. He also published The Centered Skier by Automotive Hall of Famer Denise McCluggage. McCluggage's book mixed elements of sports psychology with Zen Buddhism and became the basis for several skiing teaching programs around the country, including Sugarbush. Ray also published The Woodburner's Encyclopedia, which became a bible to many in search of alternative sources of energy in cold climates. The title sold over 100,000 copies, which was a signal achievement for such a small press.

During the mid-1970s, Ray became active in Vermont politics working on income inequality issues with Governor Phil Hoff. He was also on the first board of trustees of Green Mountain Valley School, founded by his good friends Al and Jane Hobart.

From 1976 when he first penned Journey Under the Sea until the publication of his last Choose Your Own Adventure book, Gus vs. The Robot King, this past September, Ray wrote over 50 titles in the CYOA series. From his first contract with Bantam onward, Ray opted not use ghost writers but to acknowledge every Choose Your Own Adventure author by his or her name. This ran counter to the standard publishing practice of the time of crediting all books to the founding author. This signal act helped launch the publishing careers of several young authors, including Doug Wilhelm, Jay Leibol, and Laban Carrick Hill, a winner of the National Book Award.

"I have edited and published hundreds of children's books, but overseeing CYOA at Bantam was the high point of my long career. I knew at the time that the series was making a major contribution to literacy and that was immensely rewarding," notes Ron Buehl, former VP and editorial director of Bantam Books.

Ray's interests extended to new technology. He was an early owner of an Apple II. He helped adapt two Choose Your Own Adventure books as games for the Atari console in 1984. Then he was "evangelized" by Apple Computer in 1990 to develop software for CD ROM on the Macintosh. His most notable project from this era was a creativity tool for kids titled Comic Creator that he designed and produced with his wife, Shannon Gilligan. Comic Creator was featured as Best New Software in People Magazine in 1995.

Ray and Shannon had taken over the CYOA series when Bantam Doubleday Dell, now an imprint at Random House, stopped publishing new titles in 2000. In 2003, they cofounded Chooseco LLC based in Waitsfield, to relaunch the series. Montgomery, who was passionate about education all of his life, felt that interactive fiction was critical to reluctant readers in achieving reading fluency, which is the final stage of achieving true literacy. He thus felt it was imperative to keep the books in print. Chooseco has sold 10 million copies of 65 CYOA titles in the past nine years. A movie based on Montgomery's Choose Your Own Adventure: Mystery of the Maya is currently in development at Fox Films.

Ray is survived by his wife, Shannon Gilligan; his son, Anson Montgomery; his daughter-in-law, Rebecca Montgomery; granddaughters Avery and Lila Montgomery; and his sister, Joyce Hobson, of Portland, Oregon. He was predeceased by his son, Raymond "Ramsey" Almiran Montgomery III, in 2008.

A private memorial is planned for the spring.