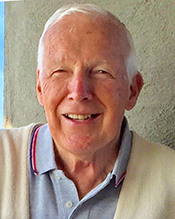 Clive M. Coutts, 86, passed away peacefully in the comfort of his home and family on Tuesday morning, January 30, 2018. Born in Morristown, NJ, on November 8, 1931, he was the son of the late Robert L. and Beatrice (Muchmore) Coutts. On June 4, 1983, Clive married Tracey (Brennan) Coutts in Morristown, NJ.

Clive was a graduate of Morristown (NJ) High School and continued his education at Middlebury College in Middlebury, VT, graduating in 1955 with his degree in political science. Following college, Clive joined the family insurance/real estate agency, Robert Lloyd Coutts and Sons, in Morristown, NJ, where, as broker, he owned and operated the real estate office until his retirement in 1990. Clive followed his love of building by renovating/constructing numerous buildings in the Morristown area. In 1990, he and his wife moved to Waitsfield, VT, where they purchased and renovated an old farmhouse into the Featherbed Inn, which they ran until 2004.

A service celebrating the life of Clive Coutts will be held from Waitsfield (VT) United Church of Christ on February 10, 2018, at 11 a.m. with a reception to follow in the church Fellowship Hall.