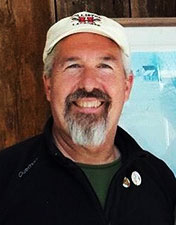 Michael Joseph Bickford, 60, of Holliston, MA, and Waitsfield, VT, passed away unexpectedly on Sunday, April 29, 2018. Born in Schenectady, NY, he was the son of Eleanor (Ricker) O’Donnell and her husband Al O'Donnell of Nobleboro, ME, and the late John James Bickford. He was the husband of 20 years to Joanne Terranova-Bickford of Holliston. Michael attended Oswego State University after graduating from Rye Neck Senior High School in Mamaroneck, NY.

He then moved to the Mad River Valley where he spent his 20s enjoying mountain biking, skiing, skateboarding, snowboarding and windsurfing. He began working for Green Mountain Coffee in his mid-20s and stayed with them for 16 years. He then continued in the coffee industry with Distant Lands Coffee for another 16 years. After that he began working with Belmont Springs and Accent Limousine of Milford, MA, and continued these until his passing. Michael was also the owner of the Vannah Farm in Nobleboro, ME.

He greatly enjoyed watching sporting events and was a lifelong Yankees fan. He attended every single game of his two children’s sporting careers. His devotion to family was unparalleled and in truth was his most beloved calling. He was a wonderful father, husband and friend to so many. His ability to listen and be fully present was rivaled only by the tenderness of his bear hugs and soothing tenor of his deep voice. He will be remembered by the love, compassion and humility that defined him, and which inevitably rubbed off upon anyone who was graced with his presence. In James Taylor’s “Secret of Life,” which he sang on his wedding day, one finds the words he embodied, “Everyone knows that love is the only road.”

Besides his wife, he is survived by his children, Zeke Terranova Bickford of Waitsfield, VT, and Hudson J. Bickford of Holliston; his siblings, James L. Bickford of Portland, ME, and Patricia E. Alfieri and her husband James of East Haven, CT; as well as many nieces and nephews; and too many friends to count.

Visitation was held on Wednesday, May 2, from 5 to 8 p.m. at Chesmore Funeral Home of Holliston, 854 Washington Street, www.ChesmoreFuneralHome.com. Further services to take place in the Mad River Valley are currently being planned and will be announced as they are finalized via Facebook. In lieu of flowers, donations to the Mad River Valley Community Fund would be appreciated, www.mrvcommunityfund.org/.