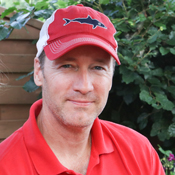 It is with great sadness we write to inform you that Kenneth Doyle died suddenly on Sunday, July 15, 2018, in Rowayton, CT. He was surrounded by family and many friends. Ken was born on December 1, 1964. He is survived by his wife Silvia, his three children Kaileigh, Carsten and Kelsey; his brother, Stephen of Scottsdale, AZ, and his parents, Frank and Caroline Doyle of Hobe Sound, Florida.

An amazing father with a dry sense of humor, Ken was an avid cyclist, skier and lover of the great outdoors and red wine. He spent most of his winter weekends commuting back and forth to Sugarbush, VT, in pursuit of the perfect turn with his family and friends. Ken has been a Rowayton resident since 1994 and was active in various community agencies in Rowayton. He was also a card-carrying member of the Sound Cyclist Bicycle Club.

He received his undergraduate degree from Muhlenberg College and an MBA from the University of Hartford. He was employed by Wells Fargo Investments.

A funeral service will be held at Saint Luke's Episcopal Parish, Darien, CT, on Saturday, July 21, with a reception for all at the Rowayton Fire Department. The burial will be private.