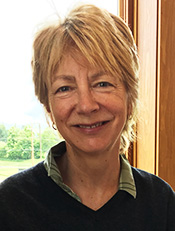 Ann L. Nelson, for over 35 years a speech therapist who worked with children and families in central Vermont, Japan, New Zealand and Ireland, combining a vocation she loved with a life-long passion for living abroad, died at Central Vermont Hospital on September 28, 2018.  She was 64.

Ann was born on January 17, 1954, at Fort Benning, Georgia.  Her father, Robert H. Harrington, was a career U.S. Army officer teaching ROTC at Auburn University in Alabama.  Her mother, Joyce Kaufmann Harrington, for reasons apparently appreciated by only a few, insisted that her third child be delivered in Georgia rather than Alabama.

As her family joined her father at military postings, Ann lived as a young girl in Japan, Germany, Virginia and London before settling in Montpelier, her father’s hometown, on his retirement from the army in the early ‘60s. Throughout her life, Ann carried fond memories of her experiences living abroad as part of an army family.

Ann attended middle and high school in Montpelier, and she graduated from Montpelier High School in 1972.  She spent the ensuing months working at the Mount Mansfield Trout Club, making canvas tote bags and sails in Kennebunk, Maine, and living in a chalet on a mountainside in Switzerland.

When she returned to Vermont, Ann enrolled at Lyndon State College, where she ultimately earned a bachelor of arts degree with a major in English. Her Lyndon State studies were interrupted, however, when she responded to a poster on a bulletin board announcing opportunities to study in Denmark through the Scandinavian Seminar program.  She arrived in Denmark at the age of 18, lived for a summer with a Danish farm family in northern Jutland, and enrolled as the only English speaking student at a Folk High School in Sovring in rural Jutland.

She became fluent in Danish and, after a stay of three years, earned an undergraduate degree from the University of Odense on the Danish island of Funen. While in Odense, Ann married Preben Hansen, a Dane, and they lived together on a Danish commune while Ann bicycled daily to take classes and to work at a mushroom nursery and a tulip farm.  She was so well liked by her Danish co-workers that she was allowed to continue planting tulips even after discovering that she had been planting many of them upside down.

Ann returned to Vermont in the mid-70s to help care for her mother, who was nearing the end of a long illness.  Her marriage to Preben ended, and Ann finished her studies at Lyndon State before enrolling in the paralegal course at Woodbury Associates in Montpelier.  She completed the Woodbury program in 1978. While at Woodbury, Ann met many interesting people, among them John Nelson, who instructed her in classes covering American Legal Studies and Civil Litigation.

Ann and John were married in Duxbury, Vermont, on December 20, 1980.  Ann worked for a semester as a speech aid at the Waterbury Elementary School, and decided to combine her love of language with her enthusiasm for being with young children by pursuing a graduate degree in Speech Language Pathology at the University of Vermont.  She earned an M.A. in speech pathology in 1982 and began her career as an SLP.