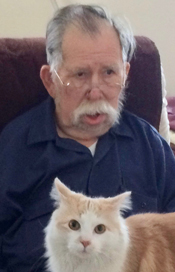 David W. Dionne, 77, a lifelong resident of Waterbury, passed away at the University of Vermont Medical Center in Burlington on Wednesday, October 31, 2018. Born in Rutland City on June 17, 1941, he was the son of the late Edward J. and Mildred (Bowles) Dionne. David was raised by his foster parents, the late Harold and Mabel Frasier of North Duxbury. On July 19, 1969, David married the former Sharon Cross in Fletcher. Sharon passed away on October 1, 1978. David was also predeceased by his longtime companion, Charlene Anair.

David was a 1960 graduate of Waterbury High School and enjoyed his time growing up on the farm. He was a longtime employee of Steele’s Propane and Plumbing Company in Waterbury where he was a propane delivery driver and he continued with Green Mountain Propane after they purchased Steele’s business. Following his retirement, David was a well-known newspaper deliveryman for the Times Argus and Burlington Free Press from 2003 to 2015.

David is survived by his daughter, Kimberly Peck of Waterbury, and her children, Benjamin Peck and Jason Russell; three brothers, James Dionne and his wife Carolyn of Manahawkin, NJ, Dean Dixon and his wife Annette of Pownal, and Gary Sloan and his wife Linda of Proctor; his foster sister, Deborah Spooner of North Duxbury; his feline best friend, Butterscotch; as well as nieces, nephews and extended family. David was predeceased by Kimberly’s daughter, Jessica Peck; a sister, Sandra Lee Sloan; and two brothers, Edward and Eugene Dionne.

Friends may call at Perkins-Parker Funeral Home in Waterbury on Tuesday, November 6, 2018, from 6 to 8 p.m. A graveside service will be held from Hope Cemetery in Waterbury on Wednesday at 11 a.m. For those who wish, memorial gifts would be appreciated to Central Vermont Home Health and Hospice, 600 Granger Road, Barre, VT 05641 (www.cvhhh.org), or the Shriners Hospitals for Children, 51 Bloom Street, Boston, MA 02114. To send online condolences visit www.perkinsparker.com.