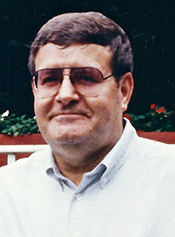 Gordon attended school in Waterbury and then at a very young age went to work on a Waterbury dairy farm. When he became of age, Gordon joined the U.S. Air Force and served during the Cold War era in policing and security. Following his discharge, he returned to Waterbury, met and married Janet and began a career at the Vermont State Hospital in Waterbury. In the beginning of his vocation, Gordon worked as a psychiatric technician and then, following his graduation from the Vera Hanks School of Psychiatric Technology, he worked as a psychiatric specialist until his retirement in 1991.

In his leisure time, Gordon was an avid coin and watch collector, he enjoyed a good book, reminiscing of his time in the Air Force with family and friends, spending time with his granddaughters and traveling with Janet, especially to Florida as well as camping in Maine, particularly in Acadia National Park.

Gordon is survived by his two granddaughters, Hannah FitzGerald of Burlington and Jamie Viens and her husband Kevin and their children Keaton and Lexi, all of Duxbury; a sister, Dorothy Backus of Randolph; and a son-in-law, Joel FitzGerald of Burlington. Gordon was predeceased by a daughter, Bethany FitzGerald, on June 10, 2008, three sisters, Doris, Avis and Arlene Perkins, and a brother, Dean Perkins.

A service celebrating the life of Gordon Perkins will be held from Wesley United Methodist Church in Waterbury on Friday, March 9, 2018, at 11 a.m. with a reception to follow in the church dining room. Later inurnment will take place in Riverview Cemetery, Richmond. For those who wish, memorial gifts would be appreciated to the American Heart Association (www.donatenow.heart.org).