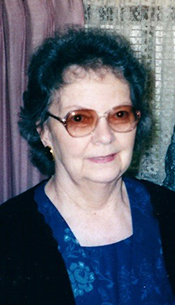 Barbara Mae Marshall, 87, passed away peacefully at Berlin Health and Rehabilitation Center on Friday, January 18, 2019. Born in Rutland on July 18, 1931, she was the daughter of the late Ralph C. and Sylvia (Goad) Morse. On December 26, 1951, she married Gerald L. Marshall in Burlington.

Barbara was a 1949 graduate of Waterbury High School and went on to complete nurse training at Heaton Hospital in Montpelier where she became a licensed practical nurse. Prior to starting her family, Barbara worked at a hospital in Tampa, FL, at Fanny Allen Hospital in Colchester and Valley Regional Hospital in Claremont, NH.

Happy and busy raising her six children and being a homemaker, Barbara later returned to nursing at a nursing home in St. Albans for several years. In 1979, she and Gerald moved to Duxbury where they have made their home since. She has found great pleasure in flower gardening, enjoyed feeding and watching the birds and wildlife, and spending the winters in Florida. Barbara was a member of Kingdom Hall of Jehovah’s Witnesses, Moretown Congregation.

Services will be held privately this spring in Waterbury Center Cemetery. For those who wish, memorial gifts would be appreciated to Central Vermont Home Health and Hospice, 600 Granger Road, Barre, VT 05641 (www.cvhhh.org). Assisting the family is Perkins-Parker Funeral Home and Cremation Service in Waterbury. To send online condolences visit www.perkinsparker.com