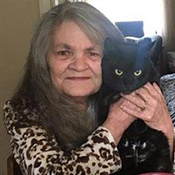 Ellen Doris Dulac, 76, of Newland, NC, passed away at her home on March 21, 2019. She was born August 19, 1942, to Everett Eugene Preston and Marion Elizabeth Campbell in Bethel, Vermont. She grew up in Vermont and graduated from Vergennes Union High School in 1960. Shortly after, she married Mervin Comes Sr. and had four children. In 1975, she married her second husband, Gene Downs, in Warren, Vermont, and they welcomed twin daughters.

Ellen worked as a pre-K teacher, dietary aide and at Waterbury Plastics in Bethel in her early years. Later she was a respite care provider for behaviorally challenged children and adults. She also was a dietary aide/cook at the Davis Home in Windsor, Vermont, and at Oakmont Nursing Home in Greenville, SC. Medical issues forced her to leave the workforce in 2004. In 2005, she married James Dulac of Newland, NC, with whom she was madly in love until her last breath and throughout their 21 years together.

Ellen was spunky, always had a joke to share or a wisecrack to make. She was highly intelligent and witty, often known to take you by surprise with what she said and then follow with her beautiful smile after she did. She loved music and dancing, crocheting and coloring and in her last few years she enjoyed keeping up with her friends and playing games on Facebook. She was a loving wife, mother, grandmother, great-grandmother and "adopted mom." Her family and fur babies were everything to her.

The family requests in lieu of flowers that you make a donation to the Avery County Humane Society in Newland, NC.

Funeral services will be held from Perkins-Parker Funeral Home in Waterbury on Saturday, March 30, 2019, at 11 a.m. Friends may call from 10 a.m. until the service. Interment will be later this spring in Warren Village Cemetery. To send online condolences visit www.perkinsparker.com.