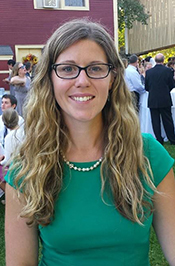 Jillian Marie (DeFreest) Weaver, 32, passed away unexpectedly due to complications from peripartum cardiomyopathy on Thursday, April 11, 2019. She was born on August 7, 1986, to Peter and Marnie (Carlyle) DeFreest in Berlin, VT, and married on June 30, 2013, to Micah Samuel Weaver in Waitsfield, VT.

Jillian was a 2004 graduate of Harwood Union High School in Duxbury and continued her education at San Angelo State University, George Mason University, and graduated from Montana State University (where she truly found herself) earning her BA degree in global multi-cultural studies.

Following graduation, Jillian remained in Bozeman, MT, enjoying the multitude of hiking trails which she loved and competing in the Grizzly triathlon. She was employed by The Home Depot in Bozeman and quickly worked her way up to management, where she was given the opportunity to continue her work closer to her childhood home and family. Soon she and Micah began their own family, as she was pregnant with Zoe.

In 2016, while pregnant with Ezra, she was diagnosed with peripartum cardiomyopathy, which eventually landed Jillian on the heart transplant list and as a result restricted her diet. Not one to accept food without flavor, she developed a passion for cooking and creating low-sodium adventures that everyone would enjoy. Along with her other passion for writing, Jillian was developing a memoir and cookbook to help share her strength and experiences to help others. But, above all, the love she had for her family was her greatest treasure. No matter how hard it was for her, she fought every day so her girls didn’t suffer for her illness.

Jillian was an active participant and spokesperson in Hanover, NH, for the Go Red for Women organization, an advocacy platform and voice of the American Heart Association “designed to increase women’s heart awareness and serve as a catalyst for change to improve the lives of women globally.”

Jillian is loved and mourned by her husband, Micah Weaver, and their two daughters, Zoe and Ezra, of Bethlehem, NH; her parents, Peter and Marnie DeFreest of Warren, VT; Micah’s parents, Wendy Sanders and Samuel Weaver of Montana; her paternal grandmother, Marlene DeFreest of Warren, VT; her maternal grandmother, AnnMarie Carlyle of Ocala, FL; her sister, Jessica DeFreest and her partner Randy Forant of Morrisville, VT; her brother, Jordan DeFreest and his wife Alyson of Fayston and their children Ariana, Jaiden and Amelia, VT; as well as aunts, uncles, cousins and extended family. She was predeceased by her paternal grandfather, David DeFreest, and maternal grandfather, Francis Carlyle.

A celebration of Jillian’s life will be held at the Inn at Round Barn Farm, Waitsfield, on Saturday, April 20, at 11 a.m. Carpooling is requested. A shuttle bus will be provided from the Waitsfield Telecom parking lot to Round Barn Farm. Friends may call at Perkins-Parker Funeral Home in Waterbury on Friday from 5 to 8 p.m. In lieu of flowers, the family would appreciate contributions to Upper Valley Go Red for Women, which focuses on heart health. To donate call 1-800-242-8721 and to send online condolences visit www.perkinsparker.com