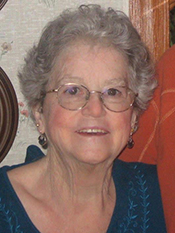 Chandamarie ‘Chanda’ Inez TorreyChandamarie “Chanda” Inez Torrey, 82, passed away unexpectedly at home on Monday, April 29, 2019. Born on Loomis Hill in Waterbury Center on August 24, 1936, she was the daughter of the late Oral H. and Alice A. (Patterson) Laplant. Chanda attended Waterbury schools and graduated from Waterbury High School in 1954. She was a proud member of the Long Horns Marching Band playing alto saxophone.

On June 27, 1954, Chanda married Richard Torrey of Hinesburg in Waterbury. Together they worked on Richard’s family dairy farm in Richmond and later on a farm in Shelburne before relocating to Waterbury Center to operate the Laplant Farm on Loomis Hill.

In 1969, Chanda began working for Harwood Union High School as a school bus driver and soon became a lead driver, affectionately known as “Bear.” She drove a bus for 19 years and was presented the Governor’s Safety Award for Bus Driving and retired in 1988. Chanda was also a founding member of the Waterbury Center Ambulance Service and was present on the first service call.

A longtime snowmobile enthusiast, Chanda was active with the Vermont Association of Snow Travelers and was a lifetime member of the Stowe Snowmobile Club. She and Richard enjoyed many hours together on the trails crossing central and northern Vermont. Chanda and Richard also enjoyed road trips, particularly their trip across the United States in 2009. She enjoyed sewing, coordinating family gatherings, attending her children’s and later her grandchildren’s sporting events and being the official chauffeur for wine tasting adventures with family.

Chanda’s loved ones remember her for her devotion to her family and the pride she took in their accomplishments. She would on occasion proudly exclaim, “We Torreys stick together!”

At Chanda’s request, private family services will be held.

For those who wish to donate, memorial gifts can be made to the Waterbury Ambulance Service, P.O. Box 95, Waterbury Center, VT 05677. Assisting the family is Perkins-Parker Funeral Home and Cremation Service in Waterbury. To send online condolences, visit www.perkinsparker.com.