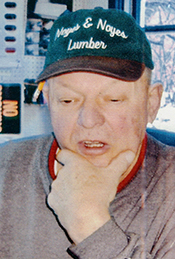 Warren was a 1950 graduate of Waterbury High School and the following year was activated as a part of the Vermont Army National Guard serving during the Korean War. Upon discharge, Warren returned to Vermont and worked several years for Green Mountain Television in Burlington. He then began what would become his lifelong career as a builder starting with Brothers Building Co. in Waitsfield. Following his own entrepreneurial compass, Warren founded Noyes and Noyes Construction, building homes and developing properties in central Vermont. Deciding to retire yet not one to be idle, he segued from building to selling building supplies from his business in Moretown known as Noyes and Noyes Building Supplies and, in addition, helped his sons establish their own building supply companies in East Montpelier and Richmond.

Warren served his community of Moretown as a lister and select board member. His memberships included Winooski Lodge #49 F&AM where he served as a past master and he was a 32nd degree Mason with the Scottish Rite and a member of the Shrine. His other memberships included Queen Esther Chapter 7 OES and the Harry N. Cutting American Legion Post 59. In his leisure time he enjoyed golfing and wintering in Plant City, FL. He is fondly remembered for being a loving grandfather, ultimate family man and for how much he adored his wife, Mary, of 65 years.

Funeral services will be held from Wesley United Methodist Church in Waterbury on Sunday, May 19, 2019, at 1 p.m. Friends may call at Perkins-Parker Funeral Home in Waterbury on Saturday from 6 to 8 p.m. Entombment will take place in Graves Cemetery in North Duxbury. For those who wish, memorial gifts would be appreciated to the Waterbury Area Senior Center, 14 Stowe Street, Waterbury, VT 05676. To send online condolences visit www.perkinsparker.com.