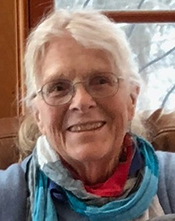 Jennifer Howard died on November 23, 2019, at her home in Fayston surrounded by family and friends. She lived in Vermont for more than 50 years, almost 45 of them with her beloved Mitchell Kontoff in their house high on a hill overlooking The Valley. Her life was filled with laughter and kindness toward her family and friends. Thus, when she was diagnosed with ALS, her “Team Jennifer” led by dear friend Lisa Loomis stood by her and cared for her until she succumbed to the disease.

Jennifer was born in Schenectady, New York, to Ruth and Alan Howard in 1944. Her mother, Ruth Hollister, was the daughter of John Murray Hollister of Plainfield, Vermont. Jennifer graduated from Hood College and went on to become both a teacher and administrator in the Vermont public school system.

In addition to being considered a superb educator, Jennifer also found time to support many charitable causes throughout The Valley. With Mitchell, she was also credited with jump-starting the defunct Valley Players theater group by creating play reading sessions which led to the rebirth of one of the most successful amateur playhouses in the country. Jennifer and Mitchell participated in the full range of acting, producing, directing and administrating for the group and were recognized multiple times for their contributions by their peers.

She and Mitchell traveled extensively, carving out a year to travel around the world and continuing to travel regularly in Europe, Canada and the U.S. Key West was a favorite destination. Jennifer loved lunches out, especially at the Big Picture where she and her eccentricities were welcomed and dancing was allowed. She loved music and loved telling people the story of her love for Mitchell. She was a generous and gregarious person who loved her friends and family fiercely. She and Mitchell were avid tennis players and regular hosts of tennis lunches at their house. In the summer, Jennifer loved going to the family cabin at Corlear Bay on Lake Champlain that she shared with her siblings and in the winter months she adjourned to Key West to sing and dance her way through until mud season.

She was predeceased by Mitchell who died in February 2015.

Jennifer is survived by her brother, Norman and wife Nancy Howard; her sisters, Gail Flanagan and Holly Pollinger; her stepchildren, Matthew and wife Jane Kontoff, Daniel Kontoff and Sara Allexander; and many beloved nieces and nephews. A celebration of her life will take place this spring. She will be laid to rest at the family graveyard on Hollister Hill in Plainfield, Vermont. Contributions in her name may be made to Central Vermont Home Health and Hospice (CVHHH, 600 Granger Road, Barre, VT 05641) or to the Valley Players (P.O. Box 441, Waitsfield, VT 05673).