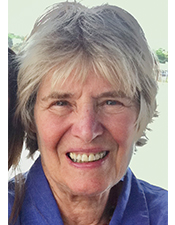 Anne Burling embarked on the final adventure of her life on April 8, 2020, after a four-year journey with cancer. Born in 1937, she lived most of her early life in Washington, D.C., where she studied art and made many lifelong friends. She loved to travel, and in 1962 she moved to Spain for a year with her two young children in the first of her great adventures. In 1973, Anne and her second husband decided to leave Washington and move to Warren after renting a house on Prickly Mountain the prior summer. This began her lifelong attachment to The Valley and its community.

Anne was always very interested in politics and during her time in The Valley, Anne, who was known as Anne Just at that time, served as Warren town auditor, a member of the Warren Planning Commission and justice of the peace. She then ran for state legislator, representing The Valley from 1976 to 1982. She also served on the board of the Vermont Natural Resources Council and as the chairperson of the Vermont delegation to the 1984 Democratic Convention in San Francisco.

After leaving the House of Representatives, Anne’s adventures included traveling to England to learn more about, and camp out among, the ancient Druid sites, such as Stonehenge and, most memorably, traveling to Nepal, where she lived in an Ashram and trekked in the Himalayas for three months. In 1986, Anne graduated from Johnson State College, and two years later she moved to the Boston area and obtained a master’s degree from Cambridge College in counseling. Anne took back her maiden name and started working as a psychotherapist in 1989, focusing on working with battered women. She also continued her volunteer work, serving on the board of the National Abortion Rights Action League and working as a group counselor for people in prison. Anne married author Donald Pfarrer in 1999, and they divided their time between Cambridge and the house they built in Warren. During these years, Anne became a passionate advocate for organic farming and alternative land management practices and helped to found Rootswork in Warren. She also donated a farming conservation easement on a large piece of her land in Warren to the Vermont Land Trust.

Anne was a wonderful listener, a great friend and a loving wife, mother and grandmother. She was a lifelong spiritual seeker who embraced Eastern philosophy and alternative approaches in the fields of healing and nutrition. Anne is survived by her loving husband, Donald Pfarrer; her daughter, Alexandra Harvey and son-in-law John Nelson of Boston and Warren; her son, Ford Harvey and daughter-in-law Tatiana Harvey of Cambridge, Massachusetts; her son, Ian Just of Arlington, Massachusetts; and six grandchildren. She is also survived by her two stepdaughters, Zoe Groom of Warren and Liza Loofbourrow of Arizona.