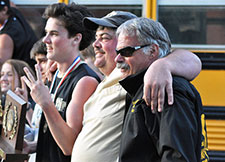 I knew Taggert as an athlete; assistant coach (and later my head coach in track and field) and I also knew him as a colleague.

I witnessed first-hand his evolution from outstanding athlete to one of the best throws coaches in the state to head coach of a highly successful program. As an athlete Taggert was extremely gifted. In middle school he was an outstanding baseball player. When he joined the newly formed HU track team as a freshman in 1981, he was still torn between baseball and track.

Russ Foregger took him under his wing and Taggert was all in with track and field.

Under Russ’ tutelage, Taggert arguably developed as the best all-around thrower the state of Vermont has ever seen. By all-around I mean he was outstanding in all three throwing events: shot put, discus and javelin. In 40-plus years of coaching track and field, I have never seen another student athlete who could throw the shot over 50 feet, hurl the discus over 140 feet and throw the javelin over 150 feet all at the same meet. As a freshman, Taggert was also a gifted sprinter. It irritated Russ when I would enter Taggert in the 100 or the 4-by-100 relay.

As an athlete Taggert was well accomplished. He was part of Harwood’s first state championship track and field team (1981) He was individual state champ in all three throwing events (1983) and both shot and javelin in 1984 (lost the discus to a teammate).

His failure to sweep all three throwing events in 1984 was most likely caused by me asking him to take on the role of not only team captain but also throws coach during the second half of the 1984 season.

Taggert compromised his own training in order to help his teammates (and fellow competitors). It was during this time that Taggert learned the importance of coaching all athletes equally. He went on to adopt this philosophy as an assistant and later as a head coach to create powerful throwers and successful teams.

Although he was always considered a star athlete by anyone’s standards, as a coach he was fully vested in the improvement of others regardless of ability. He worked equally with the 50-foot and 150-foot discus throwers. The 20-foot and 40-foot shot putters, etc.

Harwood athletes recognized this and always came to Taggert for advice. He would get, as much enjoyment over a student with special needs improving a throw by 1 foot as he did grooming the next state champion.

To my knowledge he is the only Harwood athlete to win individual state titles and state titles as both an assistant coach and head coach. Taggert was also one of Harwood’s first All-Americans. He received that honor in 1983.

Taggert had a great smile and a quiet but contagious laugh. He had the strongest hands of anyone I have ever met. When you reached out to shake Taggert’s hand, he applied a very firm grip and it became absorbed by him. You worried that you may never see your hand again. This grip strength became legendary. On long bus rides to meets, he used this ability to remove spikes that were stubbornly embedded in the soles of my runners’ track shoes. I can see him now holding a pair of pliers and remarking, “I have never been beaten.”

But it was the “souls” of his athletes upon which he had the greatest impact. He preached family, school and then track and field in that order when reminding his athletes how they should prioritize. He personally lived with this philosophy. Family events always took priority over track and field.

He emphasized that constant discipline and hard work will enable success. Good throwers develop in small steps with many small triumphs and disappointments along the way. “Inch by inch is a cinch, yard by yard is hard.” He would often say to his throwers. He emphasized the importance of team and good sportsmanship. He was a dominant figure on the third corner of the track doing the “wave” alongside the kids during the final relay event.

Taggert influenced the lives of hundreds of others. He lives on in the memories that he helped to create: a lesson learned, a joyous victory, a disappointing defeat, the camaraderie of athletes while joking with the members of his little dogs throwing club.

One of the best ways to influence people is to make them feel important. This is how Taggert made you feel when you were with him. You felt important. However, influence is only truly achieved when you are not talking and yet your words fill the room; when you are absent and your presence is felt everywhere.

Taggert’s presence, influence and selflessness will live on in the lives of many.

Rest in peace my friend.