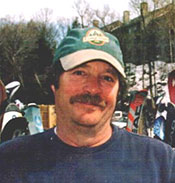 He was born in Painesville, OH, the son of John S. and Lois J. (Esch) Alex. The family moved to Bolton, MA, in the 1960s, where he graduated from Nashoba Regional High School with the Class of 1971. As a young man, he worked on the water in Gloucester, MA, and later in St. John, VI, after earning his captain’s license. He was a professional carpenter working for E.J. Alex Construction and Alex Brothers Woodworking, before starting his own business, J. Alex & Co. For many years he split his time between summers in Gloucester and winters in VT before moving to Warren, Vermont full time where he enjoyed skiing and instructing at Sugarbush.

John was predeceased by his parents and by his partner, Mary Ann Clark, who passed in 2017. He is survived by his sisters, Amy Dowd of Barre, MA, and JoAnn Mossman of Westminster, MA, and his brother, James Alex of Bolton, MA. Johnny will be missed by his extended family of friends from Gloucester, MA, and the Mad River Valley, Vermont.

A celebration of life gathering is scheduled on Sunday, July 25, from noon to 3 p.m. at the Worthy Burger Too in Waitsfield, Vermont.