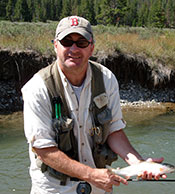 I first met Michael Russo on the banks of the Mad River about 35 years ago while I was trying to catch a trout. I was almost exclusively into throwing dry flies back then, mainly because I liked watching them wind through the flow. My eyesight was pretty good too, so it seemed like a logical plan of action. But on that quiet, late spring day, I scrambled down an embankment near a small bridge that spanned the stream and decided to try something a little less orthodox.

I made a short roll cast, gradually peeled out about 40 or 50 feet of line and let it all drift downstream in the current. The water was moving slowly and I watched the knot that attached my leader to the line for any sign that something might show an interest in what I had tied onto my tippet. It turned out that someone was studying me at the same time. I didn’t have any idea that this guy was even there, partly because I was concentrating on my drift, but also due to the fact that he had decided to observe me from a short distance before introducing himself. After a while, he walked up to me.

“What are you fishing there?” he asked, pointing at the end of my fly line.

I was a little sheepish about responding because I had in fact garnished a number 8 hook with a little red worm. I confessed my indiscretion and he smiled.

My dark secret was out. I was sure that by making this public confession, I had caused my reputation as a fly angler permanent damage. But instead, Mike just laughed.

“You’re in pretty good company then!” he told me. “You ever read “The Sun Also Rises”?”

This Ernest Hemmingway novel was then and is still now one of my favorite books and it was one of Mike’s too.  The story is mesmerizing, particularly in its description of a trip two of the main characters, Jake Barnes and Bill Gorton, take to go fly fishing together in Spain. While Bill fishes with artificial flies and catches several large trout, Jake drifts earthworms in the current and cleans up on the smaller ones.

“You lazy bum!” Bill good naturedly scolded his friend as they started on their way out of the river.

Bill’s superior catch might be interpreted as some kind of symbol of virility, at least that’s what a college English professor once tried to convince me of. But I think my learned teacher missed the real point, which was that Bill had decided that friendship was more important than any “transgressions” on the water. In this same way, Mike overlooked my sin and the two of us fished together for many years without any further discussion of my occasional lapses into heathen ways.

Mike’s own way of looking at things could be a bit odd sometimes, but his observations were usually quite apt. One night, after a day of fly fishing together, he tried to explain to me why noise, as well as motion could trigger a fish into biting. He offered that if you were sitting in your living room and suddenly a cheeseburger appeared out of nowhere and started flying around the room, the mere fact that you were on the couch, a good 10 feet away from it would in no way impair your ability to sense this bizarre phenomenon. I didn’t challenge Mike’s line of thought then, but I felt that I had to draw the line at tossing fast food at trout -- at least for that evening anyway.

However, I was very sure that coming across someone who could use an orbiting sandwich as an analogy to better understand fly fishing was a definite plus as far as the overall experience went. Diversity is a blessing, as encountering the unexpected makes the journey that much richer. Just having known a character like Mike then has made a good life all the more memorable.