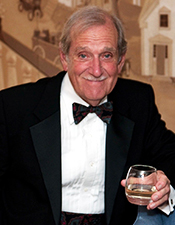 David was born in Philadelphia in 1937. He was married to the late Elizabeth Fenning Steinman for 38 years and is survived by their two children, John and William; four grandchildren, Charles, Jeffrey, Jamie and Eleanor; and companion, Arlene Diesenhouse.

David and Beth spent their early years together in Gwynedd Valley, outside of Philadelphia, and summered with their boys on Nantucket Island. The family moved to Waitsfield in 1978, where they owned and ran Gallagher’s pub, one of Vermont’s premier rock and roll ski bars of the era, once graced by Lucretia Gallagher Sears. David was the consummate publican, always in a tweed jacket, and played host to many a memorable night, including numerous Tomato War banquets.

During his 43 years in Waitsfield, David became part of the fabric of the Mad River Valley. He was part of the group of amateur dramatists that re-established the Valley Players in 1978 and was instrumental in helping the group move into its home at the Odd Fellow’s Hall. He was active in the Valley Rotary Club for decades and served as its president.

A lifelong antique automobile enthusiast, David later established the Waitsfield Motor Car Company. His life’s work and avocation were the restoration of fine, antique automobiles, a craft for which he was highly decorated. Those who had the pleasure of visiting his workshop know the true measure of his artistry. David’s works were frequently invited to and displayed at the country’s premier concours, including the Amelia Island Concours d’Elegance, the Elegance at Hershey and the world-renown Pebble Beach Concours d’Elegance. David’s restorations were shown nine times at Pebble, and he won a total of five awards, including the prestigious Montagu of Beaulieu Trophy. His antique cars were ubiquitous sites in The Valley, whether at the Polo Field, the Air Show, or parked in front of The Warren Store and from the late 1970s to the 2010s, David was behind the wheel of one of his classics near the front of the Warren Fourth of July Parade.

His life will be celebrated in a simple, private family affair in accordance with his wishes. He will rest with Beth in the Warren Cemetery, sporting his signature Nantucket reds and Gucci loafers (no socks, of course).

In lieu of flowers, the family requests that loved ones consider making contributions in David’s memory to the American Cancer Society (www.cancer.org).