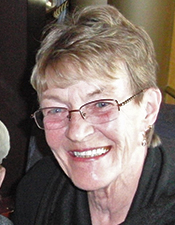 Nancy Pudvah Smith, 76, of Waterbury Center passed away peacefully on February 8, 2022, at the Central Vermont Medical Center in Berlin.

She was born December 1, 1945, in Burlington, the daughter of the late Bernard and Frances (Baldwin) Pudvah. She graduated from Hardwick Academy in the class of 1963 and continued her education at the Vermont College of Cosmetology in Burlington, graduating in 1964.

On August 31, 1968, she married James S. “Sam” Smith in Hardwick. They made their home in Waterbury Center.

In her earlier years, Nancy worked at Muriel’s Beauty Shop in Hardwick. Following her move to Waterbury, she was employed by several local businesses including, Garfield’s Beauty Shop, Steve Willis, she was a teacher’s aide at Waterbury Elementary and knitted hats for Stowe Woolens. Until she retired, she worked for McKane Consulting.

Her children were the light of her life, alongside her grandchildren, who brought her so much joy. Together with her husband, Sam, they attended as many of the grandchildren’s extracurricular and school activities as they could. She loved all animals, especially, cats and dogs, both hers and those of the neighbors. She also enjoyed watching and feeding the hummingbirds that visited, as did her grandchildren. Nancy and the neighboring ladies would laughingly call themselves the Golden Girls. Nancy will be missed by the neighborhood children, now adults, who she watched grow up over many years and often referred to her as their second mother or “the mother of Kneeland Flats.” In Nancy’s last moments she remained brave and was able to say goodbye to her sons, their wives and her grandchildren.

Survivors include: her two sons, Christian Smith and his wife, Lori, of Chapel Hill, NC, and Jeremy Smith and his wife, Erika, of East Montpelier; four grandchildren, Mackenzie, Jake, Slade and Rowen; three brothers, Michael Pudvah and Dennis Pudvah and his wife, Emma, all of Hardwick, and Timothy Pudvah and his wife, Carmon, of Leland, NC.; several nieces, nephews and cousins as well as her cherished friend and neighbor of nearly 50 years, Beverly Young, who was always a phone call away and helped make it possible for Nancy to remain at home for the last years of her life.

To honor her request, there will be no visiting hours.

A Graveside Service will be held during the summer, with date and time to be announced.

In lieu of flowers, contributions in her memory may be made to PMG (Polymicrogyria) Awareness Organization, Inc., 15642 Sand Canyon Avenue, Unit 51235, Irvine, CA, 92619 or at pmgawareness.org.

Online condolences are welcomed at: northernvermontfuneralservice.com