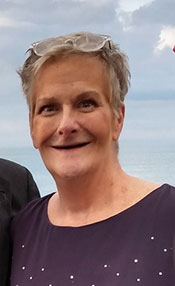 She met her first husband, John Ritchie, in Vermont while visiting friends of friends and married him in 1986 in New York. Their son Morgan J. Ritchie was born in 1987.

Her first job in Vermont was working for Sugarbush Valley Real Estate for Dick and Hanne Saltzman. She later worked for Bernard Perillat and Henri Borel at Chez Henri. She was well known throughout The Valley, working in many hospitality businesses, bartending, waitressing, catering and more. Additionally, she worked as reservations supervisor at The Bridges and at The Common Man.

She was diagnosed with breast cancer in 2013 and after several surgeries, chemotherapy and radiation, went into remission. The cancer returned in 2017 and she was treated with immunotherapy, which was successful until late 2021.

She was thrilled to be able to attend her son Morgan’s wedding in August 2021 when he married Anna (Wik) Ritchie.

Services will be private. Her family thanked the staff at CVMC who cared for Coleen in her final weeks. Donations in her name can be made to St. Jude’s Children’s Hospital. (https://www.stjude.org/)