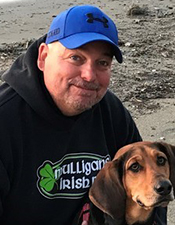 Robert (Bob) Milton Aylward Jr., age 59, United States Army veteran, passed away after fighting a battle with cancer on Thursday, June 23, 2022. Born in Barre on June 15, 1963, he was the son of Robert Aylward Sr., and the late Judith Wallace. Bob attended schools in Moretown, Barre, Waterbury, and graduated from Harwood Union High School, Class of 1981. Bob honorably served his country in the United States Army from 1982 – 1986 as a Black Hawk crew chief and has been an active member of the Waterbury American Legion, Post #59.

Bob has always been known for his brute strength, charming smile, quick wit, and ability to make everyone laugh through his great stories. Starting at a very young age, Bob was able to lift things that others could not. This later would prove to be the source of him getting into some harrowing situations, but somehow, he always seemed to make it through. As those situations happened, they became the backbone of his great stories. If you knew Bob, you have heard some of his stories and you have laughed so hard that your belly hurt.

Bob’s strength and personality allowed him to excel in baseball, diving team, wrestling, the Army, and later in his career as a construction project manager and superintendent. Bob loved life and lived it to its fullest.

Bob was preceded in death by his mother, Judith Wallace, and his brother, Dean Aylward.

Bob is survived by his sons, Brandon and Alec Aylward of Massachusetts; his father, Robert Aylward Sr. and father’s wife, Tammy, of Highgate; his sister, Jerri (Aylward) Lamson and her husband, Jim, of Moretown; his brother, Scott Aylward and his wife, Kimberly, of Oklahoma City, OK; his former spouse, Kimberly Courchaine of Waterbury; as well as cousins, nieces, nephews, extended family, and many friends.

A private family service will be held at the Holy Cross Cemetery prior to the fellowship. Friends and family are invited to gather for fellowship at the St. Leo’s Hall, 109 South Main Street, Waterbury, on Thursday, June 30, 2022, from noon to 2 p.m. In lieu of flowers, donations can be made to the University of Vermont Medical Cancer Center. Assisting the family is Perkins-Parker Funeral Home and Cremation Service in Waterbury. To send online condolences, visit www.perkinsparker.com.