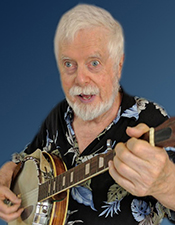 Roger A. Hussey, 82, died at his apartment home above the Senior Center in Waterbury, VT, on June 13, 2022. He was a few days shy of his 83rd birthday. He was a creative mind and a lively spirit right up until the end. He will be missed by all of us who knew him and enjoyed his sparkly company. His singing, banjo playing and joking kept us all feeling happy when he was around.

Roger called himself a “flying goat” for his quirky, poetic perspective on life (and jovial stubbornness). This came with an amazing tenor voice that was strong, clear and soaring even into his 80s. He regularly would burst out into an Italian Aria as he greeted someone in the hallway or dining hall.

Roger was born on June 16, 1939, to Ray and Margaret (Rule) Hussey and lived in the Boston area during his early life. He was the middle of three children. His two sisters, Eleanor and Bonnie, predeceased him. He went to Roxbury Latin School and later to Harvard University. Throughout his working career, he worked in computers, but he did extensive traveling as a merchant marine. In the 1990s he ran for Vermont elected offices (state representative from Windsor-Orange 1, and governor).

Roger married Carole Denesha in the early 1960s and had one child, Nathaniel Hussey, who lives in Columbia, MO. He had several other marriages following. He lived in VT, NH, MA, NY, CA and overseas at various times. In the last years of his life, he lived in Waitsfield and Waterbury, VT, and became an active member of the senior center in each of those towns. He played banjo for the Tuesday congregate meals in Waitsfield and always had a pun or a joke to share. We will miss him.

Parker-Perkins Funeral Home, in Waterbury, VT, is managing his cremation. No public memorials are planned, but we encourage anyone who knew him to play a tenor Italian Aria and enjoy remembering him as you do.