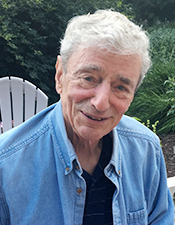 Anthony Michael Rocchio, Rhode Island native and longtime Vermont resident, was a poet and storyteller who passed away peacefully on Saturday, October 8, 2022, surrounded by his loving family. He lived courageously with dementia for many years. Born on December 16, 1933, to Michael and Ernestine (Donatelli) Rocchio, Anthony grew up on Cottage Avenue in North Providence, Rhode Island, where his grandparents, aunts, uncles, and cousins were all neighbors. Anthony remained a Rhode Islander at heart while living a long, full life in both Vermont and New Hampshire. He cherished his memories of experiences on the RI coast with relatives and friends. Until the end of his days, Anthony continued to celebrate friendships crafted from each phase of his life and loved bringing people together.

Upon graduating from North Providence High School in 1951, Anthony attended Norwich University in Northfield, Vermont, before enlisting in the Army at the age of 18. He trained in the Rocky Mountains for his role as a mountaineer during the Korean War where he led search and rescue missions on Mt. Fuji in Japan. That experience was transformative, opening his eyes to the value of understanding other cultures.

His passion for connecting with people defined him and lasted throughout his life, and fueled his love of literature. Anthony completed a degree in English at the University of Rhode Island (1958) before earning a master’s degree in English Literature (1964), focusing on the works of William Faulkner. His teaching career began in Rhode Island as he began his family.

Moving to Vermont in 1963, Anthony taught English and coached basketball at Montpelier High School. In Montpelier he also directed drama for The Masque, the school’s drama club, producing one-act and full-length plays. From 1972, Anthony’s career continued at Hanover High School in Hanover, New Hampshire, as an English teacher and head football coach.

In Hanover he engaged in spirited conversations long into the night with fellow educators from both Hanover High School and Dartmouth College. He reached out to coaches at Dartmouth for advice and mentoring; relationships forged with the team lasted throughout his life.

Anthony celebrated friendships with good food: It was not uncommon for him to cook for visiting relatives and friends, or arrange a spontaneous trip, loading friends into the car, to drive to his beloved Rhode Island for some authentic Italian fare.

In 1979, Anthony accepted a position at Providence College as Academic Advisor to Athletes: one of the nation’s first such positions. He fostered academic skills and built enduring relationships with student athletes, particularly the school’s star basketball players.

Anthony ended his teaching career at Springfield High School in 1997. He and his loving wife Cynthia lived in Windsor amid supportive friends and neighbors. During those years, they enjoyed bicycling, traversing Iowa in the Ragbrai ride, traveling across the Canadian Rockies, and visiting Italy and England. In retirement, Anthony worked at the Dartmouth College gym, volunteering for football games, greeting everyone with a friendly smile and a kind word.

Anthony will be remembered as a devoted son, brother, husband, father, grandfather, and friend. And for his ability to connect with people from all walks of life; his enthusiasm and sense of humor, his love of language and literature, were contagious. He encouraged his children and students to be understanding, patient, and kind, and to avoid judging others.

Anthony is predeceased by his parents and his younger brother Michael. He is survived by his devoted wife Cynthia DeVaux Rocchio; his loving children Anne Elizabeth (Chris), David (Jackie), Paul, Tina, and Mia (Steve), and by his adoring grandchildren Giulia, Callum, Arianna, Benjamin, and Antonia. The family is planning a gathering to honor and celebrate Anthony on December 28, 2022, in Norwich, Vermont.

For details of the celebration, email his daughters Anne and Mia (This email address is being protected from spambots. You need JavaScript enabled to view it. or miadonata.rocchio@gmail>). The family would like to take this opportunity to thank the dedicated caregivers at the Grafton County Nursing Home in North Haverhill, NH. Donations to Alzheimer’s research may be made in memory of Anthony through Cure Alzheimer's Fund.