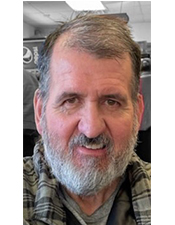 He began his education at Ward 5 in Barre; his family moved to Moretown in early 1960s and he attended Moretown Elementary School and later graduated from Harwood Union High School in 1973.

Brian loved being in the woods whether it was hunting, cutting firewood, or just spending time at his camp in Duxbury. He was a loyal NASCAR race car fan and a frequent spectator at Thunder Road cheering on his favorite drivers. He also loved going to auctions with a love of old things. His dream when he retired was to begin traveling in his camper. Unfortunately, Alzheimer's stole that dream away and Brian eventually moved first to Maple Ridge in Essex and finally to the Arbors in Shelburne where he received wonderful, compassionate care at both places. Until the end, there was a twinkle in his eye and a smile on his face.

He is survived by a brother Calvin Ward, and his wife Sharon, of Newport Center, VT; a sister Kathy Ward, of Moretown; nieces, nephews and extended family.

A private service will be held at a later date at the convenience of the family. To send online condolences, visit www.perkinsparker.com.