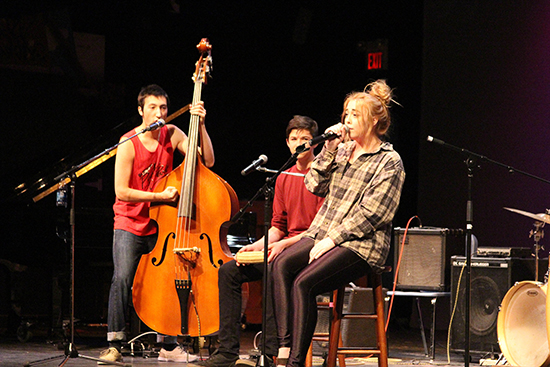 It's official! The Harwood Union Assembly Band, also known as Nothing Quite Yet, received the most votes in a social media contest to determine which band would get to play at Grace Potter's Grand Point North concerts in September.

"It's amazingly perfect for them," said their teacher, conductor and mentor Bruce Sklar.

Sklar said that he heard about the contest from a colleague at the Contois School of Music.

"I heard that they were signing up for this contest and thought we should too. I sent a link to my daughter Nina who got things rolling and we started getting votes," Sklar explained.

Shortly before the contest ended Sklar was able to send out an email blast to the Harwood Union community that garnered enough votes to put the school's band in first place.

"This is the first time that a school band won and they were surprised. It's never happened before," he said.

Sklar said it was particularly exciting because Grace Potter herself is a graduate of Harwood Union High School (and she recently tweeted that she will be opening for two Rolling Stones shows this summer).

The Harwood Union Assembly Band is basically the exact same group that played at The Warren Store on the Fourth of July last year.

"They call themselves Nothing Quite Yet. They'll be playing at the Warren Fourth of July this year as well. They also won the Battle of the Bands," Sklar said.

Their musical repertoire is diverse. They play "Isn't She Lovely" by Stevie Wonder, "Valerie" by Amy Winehouse as well as The Beatles, The Rolling Stones, Led Zeppelin, John Mayer and more.

"That's the work I do with them, making sure that everyone's wants are met in terms of repertoire and that everybody in the group brings a professional attitude toward the pieces," he added.

"This group has been solid since they were freshmen. They'll be ready for this. I'm going to work them very hard this summer," he said.

I'm highly confident they'll hold their own on that stage," Sklar added.