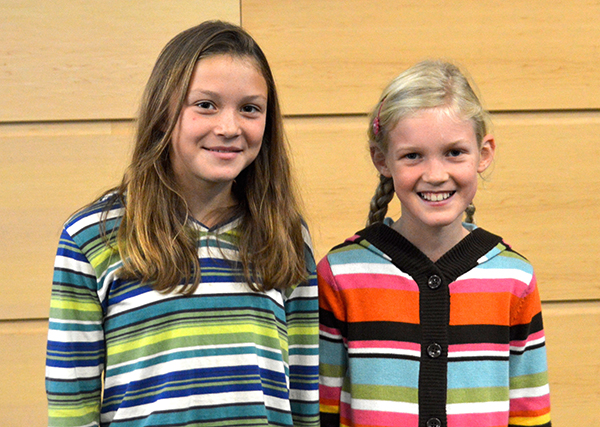 Many kids in The Valley have a special relationship with Vermont’s forests. Wren Forbes, 11, of Fayston and Fiona Stowell, 9, of Warren are two of those kids.

Last Saturday, November 7, Forbes and Stowell read essays about their town forests in front of a large crowd at the Vermont Town Forest Centennial Celebration, held at Vermont Technical College in Randolph. Both were awarded prizes for their winning entries to The Voice of Young Writers Project.

The contest was statewide, and five judges read 45 submissions before awarding first place to Forbes and second place to Stowell. Created for kids in grades 3 to 12, it prompted writers to express either advocacy or history of their town forest. Each winner received a monetary prize and a 2016 pass to Vermont state parks.

Forbes’ essay, titled “A Forest for All,” begins with a story of relocating a raccoon, which was living in a fallen tree after a storm, from her home at Knoll Farm to the Chase Brook Forest in Fayston.

The essay evolves into her musings about the quality of education in The Valley and, she writes, “I think about all the ways Fayston School could improve their educational learning by using the Chase Brook Town Forest.”

“I think it is really remarkable and special that the Fayston School has 80 acres of public forest right across the street. Imagine all the things they could do! Imagine if instead of having recess on a playground, kids could have recess building forts in the woods. Imagine if in the spring all the kids could go into the forest and collect sap to make maple syrup.”

“Imagine if one day a week kids spent the whole day in the woods learning fire skills, tree identification skills and tracking skills...if kids could learn stream ecology in Chase Brook and why and how it flooded in Hurricane Irene...if as part of the graduation ceremony the sixth graders slept under the stars in the woods. There are so many opportunities.”

In Stowell’s essay, “A Walk in the Eaton Town Forest,” she describes how the environment begs to be played in and explored. She writes about climbing pine trees, encountering a rock path that looks like “the way into a palace” and a mound of moss “that looked like a cozy bed for a fairy friend.” The Eaton Town Forest, Stowell writes, is “a good habitat for our animal friends.”

Both essays are a reminder that children, adults and even school systems can develop a deep appreciation and even a lasting relationship with Vermont town forests.