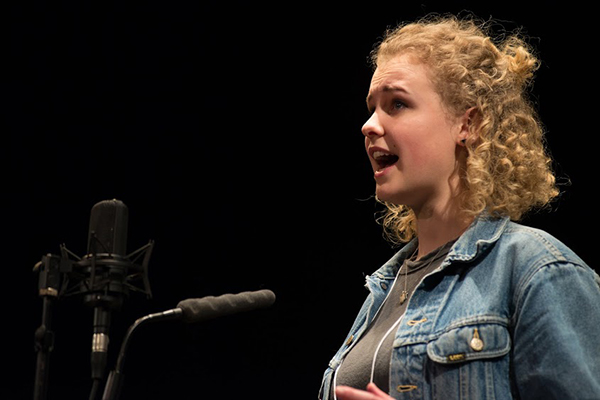 On Thursday, March 17, Anna Van Dine, a senior at Harwood, placed second at the state level of the national Poetry Out Loud competition (POL). The POL competition tests participants on memorization and recitation of poetry, accuracy, aspect of performance and the participant’s ability to convey meaning to the audience. There are different levels of competition; the winner from each participating school competes in the semifinal round. The 10 finalists who emerge from this round go on to compete at the state level. The winner from the state level goes on to represent the state at the national level where each of the 50 states is represented.

Van Dine has a long history with poetry. She loves to read it and says she used to write it but doesn’t anymore. This is her third year of participating in Poetry Out Loud. All three years (eighth grade, 11th grade and 12th grade), she has made it to finals. Last year, she placed third in the state competition. This year, Van Dine recited three poems: “Vixen,” “Monet Refuses the Operation” and “In a London Drawing Room.” “I did ‘Monet Refuses the Operation’ last year as well,” Van Dine said, “and chose to repeat it because I liked it so much and wanted to work with it more. The more time I put into a poem, the more understanding I develop. Poems are like people. In order to represent them fully and complexly, I need to know them like I know my own mind.”

While Van Dine is done with this year’s competition (unless the Vermont winner chooses not to compete in the national level of the competition), she will continue to explore her love of poetry. “I think Poetry Out Loud is an extremely important revival of something we are losing in our lives,” she said. “When you memorize a poem you get to know it. Not in the way you memorize facts for a test; you come to know it for what it is, not what you or other people think it is. You get to know it by making it a part of you. I am so grateful to have these poems as part of me and they will never go away.”

Van Dine would like to thank Tedin Lange, an English teacher at Harwood who has helped Van Dine with her recitation for the past few years. “Each of the poems has a bit of her in them, too, even though she probably doesn’t realize it. Her help is the reason I got anywhere.”