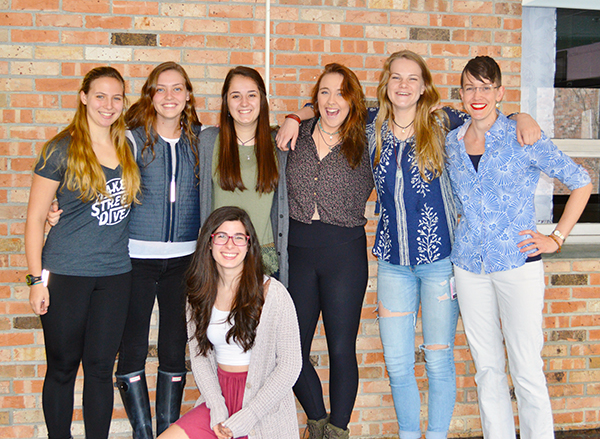 Seventeen students of Harwood Union High School (HUHS) returned in early March from a three-week exploration of Rwanda with new perspectives on culture, history and themselves.

“People have expectations of Africa,” said sophomore Eve Golden, “that it’s an uncivilized place, where people live in grass huts.”

But “it’s a big continent, actually,” senior Nina Sklar explained. Students said that they found Rwanda to be a quickly developing country with populated cities “where people go to work and school every day, just like us.”

HUHS students began traveling to the country over a decade ago, when English teacher Steve Rand was inspired by what one of his students encountered there while volunteering to spread awareness about HIV/AIDS. “He realized how interesting the country was,” Sklar, who has pursued the trip twice in her high school career, said.

Students partnered with ethnographers from the Vermont Folklife Center to interview and film Rwandans about their lives – a project that has been ongoing for six years. They learned from a school manager, a seamstress, a coffee farmer and a photographer who had fled the country’s genocide at just 14 years old. Students thought about how to tell their stories “without Westernizing it,” Sklar said.

They volunteered for the national organization Days for Girls, a program started in Vermont. Before arriving in Rwanda, they packed over 200 “feminine kits” for girls, each containing washable pads and other hygienic items. In rural Gitarama, where these items are unaffordable and girls often stay home from school during menstruation, the kits were distributed.

Learning about the 1994 genocide and its history “was really hard for a lot of us,” said Golden. The country, which is just slightly larger than Vermont, contains over 400 memorial sites honoring the atrocities that unfolded just two decades ago.

Students said that they were surprised to see how Rwandans are dealing with the aftermath. Often perpetrators reach out to family members of those whose lives they had taken. One man was working for a woman after having taken the life of her husband and the woman had allowed a friendship to blossom. “That’s not an uncommon story,” they explained.

“We as a culture do not tend to forget or forgive, but they do,” said senior Aenea Mead. English teacher Tedin Lange, who supervised the trip this year, said that there seemed to be “two paradoxical things happening,” with the kind and forgiving Rwandan spirit on the one hand and a horrendous history of violence on the other.

Sklar said that “in our country, throwing people in prison just breeds anger” and that Rwandans have taken a different approach, with so many named as perpetrators.

“You can’t just put half the country in prison,” Lange added.

Rwandans also invited HUHS students to participate in Umuganda, a community work day that occurs on the last Saturday of each month. Students said they helped with building projects by preparing the ground and making mud bricks.

“But people always think we’re going to help others. No, they’re helping us,” Harris said. The trip is about self-exploration for these young students, who said they had to learn how to throw themselves into the unknown.

“We learned to relax and just go with it,” said senior Maya Kalkstein, “which was really hard at first.”

They said that they learned how to think independently, and, “I saw everyone rise in a way that school doesn’t allow for,” Lange said.

Living in the moment turned out to be the student’s preferred mode of being, which is what made it so difficult to return to life at school. “Here, you have a routine that’s dictated to you,” Sklar said.

They explained that the emphasis on social life, appearance and even television were hard to deal with upon returning. “I’m starting to worry about how I look again,” said sophomore Julia Louer. “I felt better not caring during the trip.”

Students visited schools, an orphanage and rehabilitation center, natural habitats and markets. The trip cost is $3,300 but can be funded through scholarships and private donations.

Sklar plans to revisit Rwanda during her gap year after graduation and students said that for those who contemplate whether or not next year’s trip is right for them, “You just have to force yourself to do it.”