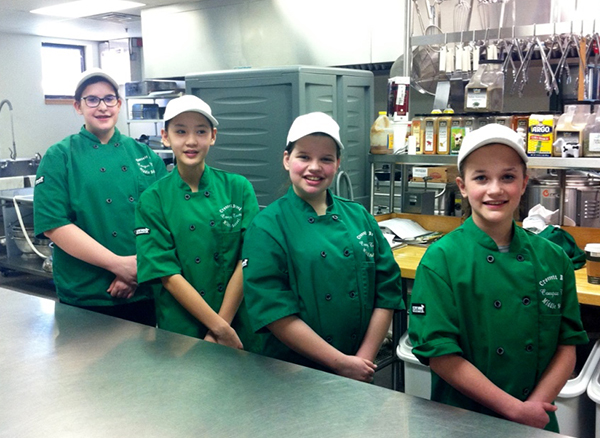 The four-member Cougar Team from Crossett Brook Middle School was way ahead of the game. They arrived at the Champlain Valley Expo in Essex Junction an hour early for the ninth annual Jr Iron Chef VT competition and while their competitors bustled through the doors with boxes of gear, the Cougars already had their tiny work table perfectly laid out with cutting boards, knives and heads of cauliflower and garlic waiting to be chopped.

On March 19, 56 middle and high school teams from around Vermont competed in this culinary event to produce a prize-winning vegetarian main dish in 90 minutes or less, entirely from scratch and featuring local produce.

Crossett Brook seventh-grader Ellett Merriman enthusiastically described what they were about to create: Cauliflower Dream, a delicate cauliflower fritter piled high with roasted beets, carrots and parsnips and drizzled with a yogurt cream.

The team produced a brochure with their original recipe and a list of local farms that supplied their ingredients, including Rogers Farmstead and Jericho Settler’s Farm. They had even made up a rap. They were ready to rock.

The crowd could sense the prickle of time pressure and excitement. In the very center of the exhibition hall, hand-painted banners of giant vegetables were hung, pop music was blaring, parents were crowding in with video cameras and judge captain Jim Birmingham was yelling, “Ready, Set, Chop!”

The Jr Iron Chef VT competition began in 2008 as the brainchild of two organizations in the forefront of the farm to school movement: the Burlington School Food Project and Vermont Food Education Every Day (VT FEED), a program of Shelburne Farms and NOFA-VT.

Event coordinator Amy Gifford said that her greatest hope for the program “is to help kids develop a healthy relationship with food that lasts a lifetime.” She said that the event is not about training culinary professionals – although some students are inspired to pursue that field as a result of their experience – rather, creating healthy relationships with food can combat so many important public health issues, such as childhood obesity and diabetes.

By the time these student teams come to Jr Iron Chef VT, they have practiced together for several months. Team names like Rebel Cool Kids, Dicing Divas and Ninja Pumpkin Hippo Thigh High Flyers reveal the high spirits of their members.

But look around and the sophisticated food tastes and complicated recipes belie the young age of these chefs: sweet potato and apple perogies with maple balsamic reduction and Dijon beurre blanc, Japanese tempura vegetables with udon noodles and umami sauce, melanzana deliciosa.

“Part of our success is letting kids choose their own teammates and keeping the whole thing as kid-driven as possible, said Lonnie Paige, food service chef at Twin Valley School. His teams have won 13 awards in eight years. Being in the kitchen has earned such a “cool factor” at Twin Valley that now as many as 50 percent of 235 students participate and the school holds its own cook-offs to bring their most qualified teams to Jr Iron Chef VT. (Each school is allowed a maximum of two high school and two middle school teams.)

Waterbury-Duxbury director of food service Erika Dolan, who is coaching the team, agrees that kids thrive in the program. For her, it is hugely satisfying to see them improve their cooking skills and learn about local food. But it’s also about something as powerful as a sense of belonging, she said.

“I heard a group of new team members ask a former team member, ‘What is the best thing about Jr Iron Chef?’ He answered, ‘The best thing is that we are like a family.’ That broke my heart and was when I understood that this was about much more than just cooking and training for a competition,” she said.

As Dolan’s team puts the finishing touches on their Cauliflower Dream, cheering is heard as team after team holds up a little red flag signaling that they are finished. Volunteers run through the room with trays, whisking their masterpieces away through closed doors marked “Judges Only.”

Teams are judged in three categories. The Mise en Place award goes to the team with the best teamwork, communication and professionalism. Lively Local goes to the team that makes the best use of locally sourced ingredients, a prize that Crossett Brook won in 2013. Crowd Pleaser goes to the dish that hits it out of the park on flavor and originality.

Seated at three long tables in the judging room are 11 judges. Together they represent the wide spectrum of interests and professions that this event brings together: farmers, chefs, food writers, school lunch managers, state representatives and child nutritionists and, of course, students.

This year, that student is Peggy Fisher, who at 10 years old is the competition’s youngest-ever judge. Fisher became a cooking celebrity when she made it to the final four of the Food Network’s Kids Baking Championship in 2015. It turns out she has well-informed opinions about food other than cupcakes. “This could really use something crunchy to balance out the creaminess,” she said, as she tasted a spaghetti squash dish. “Maybe some toasted nuts.”

One by one, the dishes get passed down the table for tasting. “This one is absolutely classic,” said chef Donnell Collins of Leunig’s Bistro about the neat round stack of eggplant parmesan dashed with brilliant green pesto and garnished with a purple topknot of delicately fried filaments of purple eggplant skin. Not only delicious but nicely replicable for school lunch programs, this dish from Champlain Valley High School ran away with the Crowd Pleaser award.

The Crossett Brook team didn’t walk home with an award this year, but they felt that every bit of effort was worth it. They improved their cooking skills. They became close friends. And in April, these four students will make and serve their recipe to the whole school.

Finally, if Best Rap had been a prize category at Jr Iron Chef VT, they would have stolen the show.

We’re the cauliflower dream
We're really not mean
We’re a working machine
And we are great as a team!

Freelance writer Helen Whybrow is the author of A Man Apart and other titles. She farms at Knoll Farm in Fayston, Vermont.