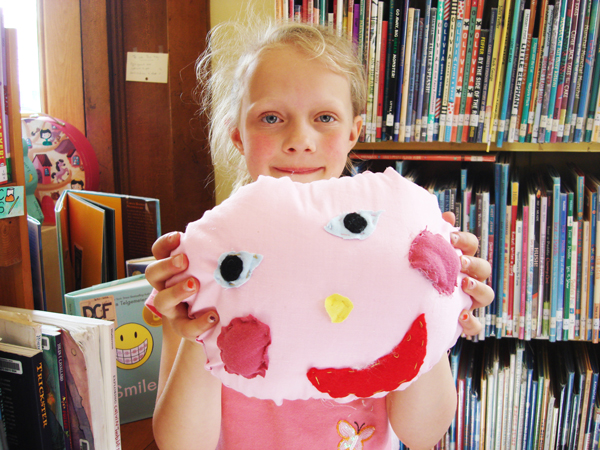 A dozen kids crafted stuffed dolls, heads and pillows at the Joslin Memorial Library in Waitsfield on Saturday, May 14, from 1 to 4 p.m.

The colorful children’s room of the library was filled with fabric scraps, yarn, string, stuffing and busy bodies sewing both by hand and with machines.

An 11-year-old constructed a three-dimensional dog head with pink ears and a snout. Another made a rabbit head with large, black buttons for eyes.

The free workshop was organized by Joslin librarian Meredith Jacoby and led by The Valley Reporter staff writer Tracy Brannstrom, who learned to sew over a decade ago, when she was a freshman in high school.

After taking courses in clothing construction and design in her small Midwest high school, she was struck by the fact that, with some effort, she could make any clothing, toy, costume or interior project that she desired. “It’s empowering to make things for yourself, from your own mind,” she said.

For the workshop, Brannstrom wanted to impart the concept of making a stuffy onto the kids. First she had them cut two fabric pieces of the same size and then place them with the right sides touching each other. They then stitched them up, leaving a hole.

The hole allows one to flip the fabric shell inside out and pack the stuffing in. It is then stitched up by hand.

The concept can be translated to any type of stuffed toy – be it a dragon, a baby doll or a slice of pizza.